Schooled A Couple Witches in Swimsuits

Schooled A Couple Witches in Swimsuits

Now for some spots in the city. I had one for a new movie for Blake Lively, which for me was meh, partially because it was in Brooklyn. However, did a little digging and I saw that the film was produced by Eon Productions, who rarely do anything but James Bond films. Hence my interest was piqued because I wanted Michael G. Wilson and Barbara Broccoli, son and daughter of Cubby, who have been producing the 007’s for decades now. They both appeared last November at an event I wasn’t aware of with Daniel Craig in New York, which was the first time they’ve been here publicly since Skyfall in 2012.

Anyway, I drove out there, parked and walked over. The rail was already taken by graphers I know, so rather than go to the far end, I stood behind them. Again, whether I got Blake or not, didn’t care. Barbara arrived early, no Michael though, and the graphers let me in to have my book (old DK published James Bond 007 visual companion – officially licensed by EON) signed and get the selfie. Blake’s car rolled up but sat there for several minutes. While that was happening, I was stunned to see her mother and more importantly sister Royin Lively get out of another car! Few there probably knew who Robyn was but I screamed her over. I’ve wanted to meet her forever, as I had a big crush back in the Teen Witch/Karate Kid III days of her. She was super nice, and I got a selfie. Blake racked the barricade but I couldn’t get at her. Jude Law arrived and I got a scribble from him. I waited a few minutes but it seemed everyone was in, so I went home. Found out that Blake amazingly stopped on the way out too, but again, I got Robin, so I was on easy street. Now if Jason would do a local con!

I didn’t want to be bothered with the booksigning for Kathy Ireland, largely due to having some shots at Antonio Banderas earlier in the week. So I went to a spot for Kathy, where she was legit mobbed by 2 dozen idiots who likely have never seen her before. I managed to get my Necessary Roughness photo signed. Antonio was similarly mobbed. A few of us moved to a very quiet spot for Kathy, where she excited and was very sweet. Antonio was another story of failure. He did nothing at a talk show, then we went to a few theaters. At the first one, he snuck in a door I wasn’t aware existed, though some dealers got him by luck. They had given up and were walking to the subway and spotted his guard. A few of us waited there, but, of course, they took him out another door! We went to another theater, but he exited with the crowd so that was a total waste. 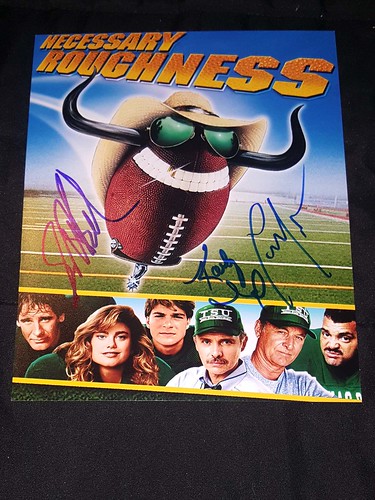 A main want of mine has been Alyson Hannigan, to complete my primary Buffy the Vampire Slayer cast. I still need a few of the supporting stars like Tara, Ms. Calendar, Joyce, Harmony, Drusilla, etc. But I digress, Ms. Denisof was appearing at a rather bad spot, due to the sheer number of photo with wackos who are always there. I got there super early, and eventually we had about a dozen there, mostly graphers. She was really late, and many left, leaving a small crowd. Unfortunately, though Alyson tried to stop, the network security guard literally forced her away. She had to walk to another spot, and we asked her again. This time, she did stop, despite the same guy trying to manhandle. She signed and then took a few photos. I got one (finally)! I also spotted the adorable Sofia Carson walking out, and got the photo. I missed her during TV week last year.

The way out was a problem for me, because the crowd was enormous, and I had to get to another spot for the cast of Schooled. I needed her in an off-color marker on my HIMYM piece, so I figured it probably wouldn’t work out and left. She stopped once again, despite the crowd, but it was questionable whether I could have gotten my thing done right.

Meanwhile, the Schooled cast did stop on the way out, so I had an 8x10 signed by AJ Michalka and Brett Dier, who I never met before. Both were super nice and stood around chatting with fans before walking off. I had AJ already so I got a pic with Brett alone. Unfortunately, they took so long to leave that I missed Alyson departing a spot by a few minutes. Oh well.

Great stuff, Greg. Alyson is one of my top wants as well
Top

So jealous of the Robin pic... been wanting to meet her forever. Don't get why she doesn't done any Cons of late...
Top

Finally on Hanigan!! I need her myself, nice!!
My collection:
https://www.flickr.com/photos/woodmo/albums
Top

idk, I follow her IG and she's like constantly working, traveling, etc. You'd think with so many Karate Kid "reunions...." Also, her husband Bart is probably MORE popular than she is, they could appear together and do quite well.
The Paunch Stevenson Show pop culture podcast : http://www.paunchstevenson.com
Top