This is the place to post reports from signing or on the street meets
Forum rules
DO NOT post the location for on the street meets. To keep the spots from being too crowded, we don't allow locations to be posted. You may only post location details about pay meets and organized free signings.
Post Reply
9 posts • Page 1 of 1

Spent my post-Thanksgiving Friday hitting the road to North Carolina for the annual WrestleCade convention. My primary want was the "Full" (yes, I know that Randy Rose and others were involved as well, lol) Midnight Express of Condrey, Eaton, and Lane. I've met Stan and Bobby before, but always seemed to miss Dennis when he recently started doing cons again. I also had a handful of other wants on various projects as well, so I made a road trip out of it.

When I made it to the convention center in Winston-Salem, I was surprised to see how big this con was-much bigger than your standard "wrestling con", and pretty much on par size-wise with the WrestleCon shows that run on WrestleMania weekend. Aisles were tight and the room was crowded, so it was at first difficult to find where wrestlers were sitting. But after roaming the floor, I finally found the Midnights table. Oddly, Cornette wasn't booked for this (I'm guessing he must have heat with the promotion for some silly reason, lol) but all three wrestlers showed up and were super friendly. They were also priced VERY affordably - I got a total of six autographs and the group photo op for $70, which I was very happy with.

After getting the Midnights, I cruised the room for the rest of my want list. I got D-Von Dudley on my WrestleKingdom 2 program, Kaz Hayashi on a 2008 All-Japan program from a show I was at, which Kaz marked out for, and Davey Boy Smith, Jr on my WrestleKingdom 12 program.

I was then down to my last two wants - Michael Hayes and the Iron Sheik. The problem was, neither of them were at their table at the time. Fortunately, both of their tables were literally right next to each other, so I was able to hang out in the general area to wait for them to (hopefully) show up. Hovering around the area, I notice Hayes enter the room from a side door, so I hustle over to his table. Luckily, there was no line formed yet, so I camped out to be the first on his line. Got a combo from him, so then it was down to JUST the Sheik.

At this point, a small crowd had formed around Sheik's table, which he was sharing with Sgt. Slaughter. More than one fan jokingly (but accurately) walked by us and said "So this is the 'I've gotten everybody else I need, but am waiting for Iron Sheik' line, huh?" I was nervous because Sheik was apparently booked to sign on Friday, but no-showed. Also, the handler had apparently been saying that Sheik would be down in 30 minutes...for an hour and a half. For most guests, I probably would have bailed by now (especially with a looooong drive home waiting for me), but between his health and his tendency to cancel appearances, I couldn't bring myself to bail if he was actually in the building somewhere. Thankfully, Sheik eventually gets brought in, to the applause of his assembled line. I got him and Slaughter on an 8x10, and the dual photo with both.

With that, I got in my car and started my long (scheduled for 8-9 hours, but stretched to 11-12 due to weather and accidents slowing traffic to a crawl at times) trip home. Despite the length, I would definitely do this con again if they booked names that warranted the trip. Fun time. 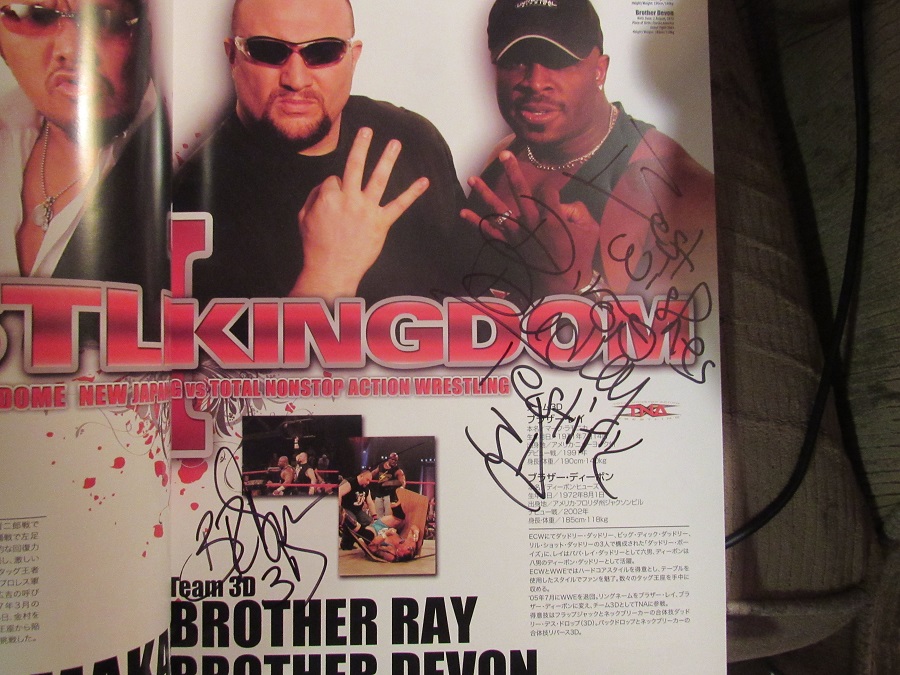 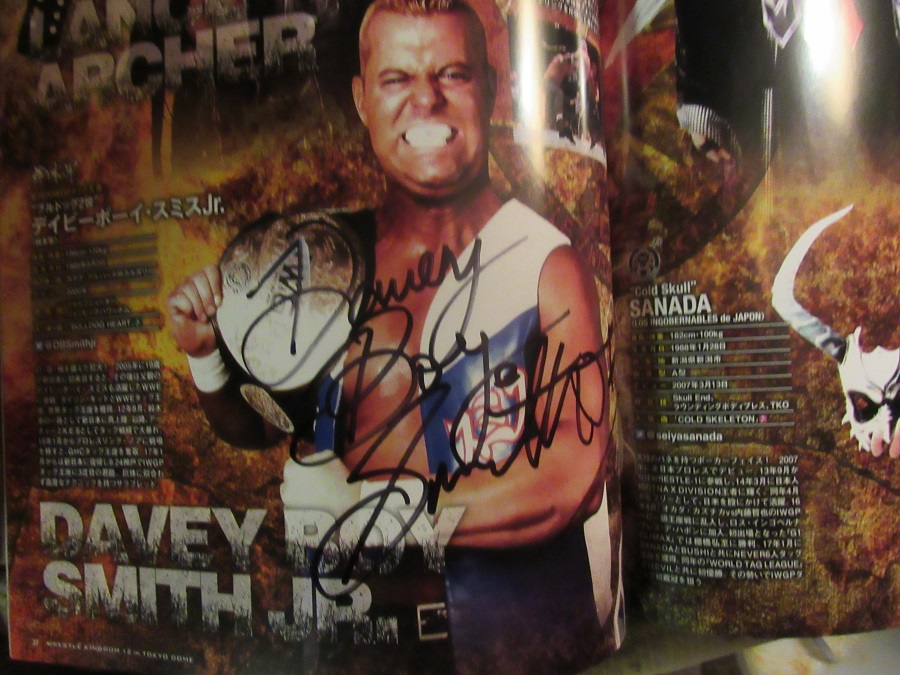 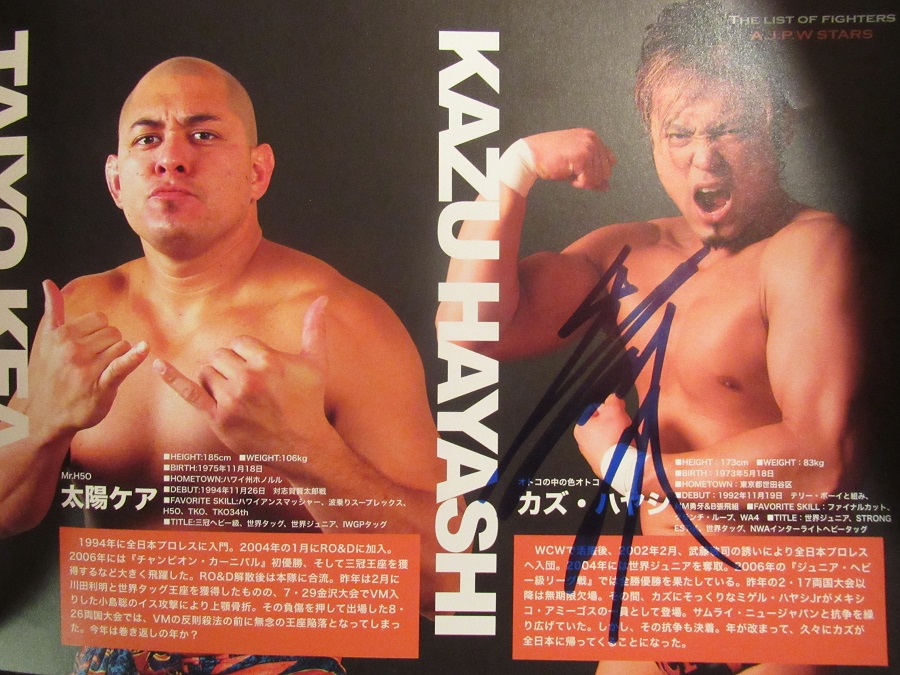 Kaz Hayashi on 2008 All Japan program 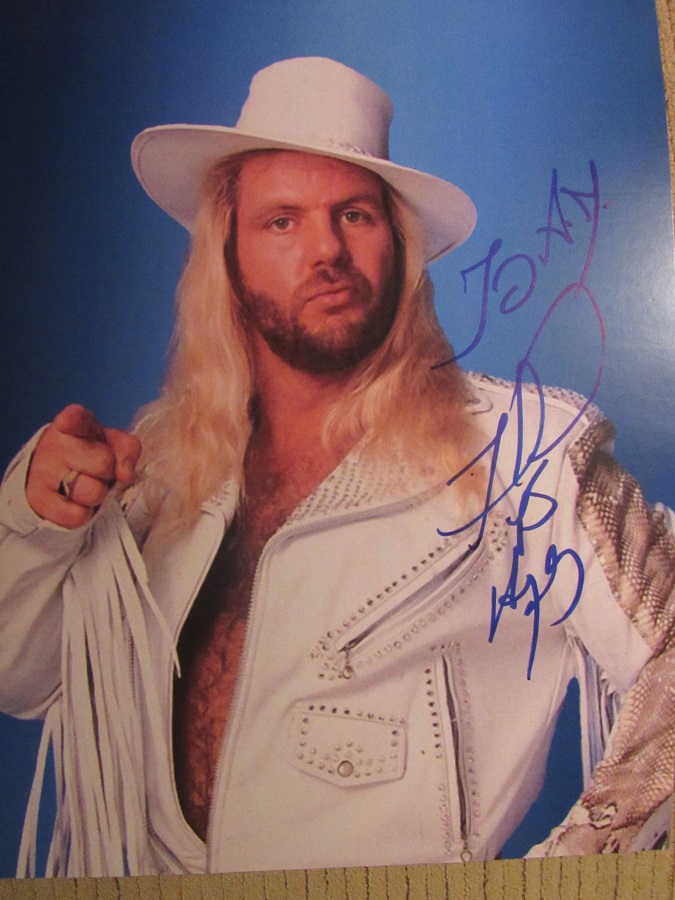 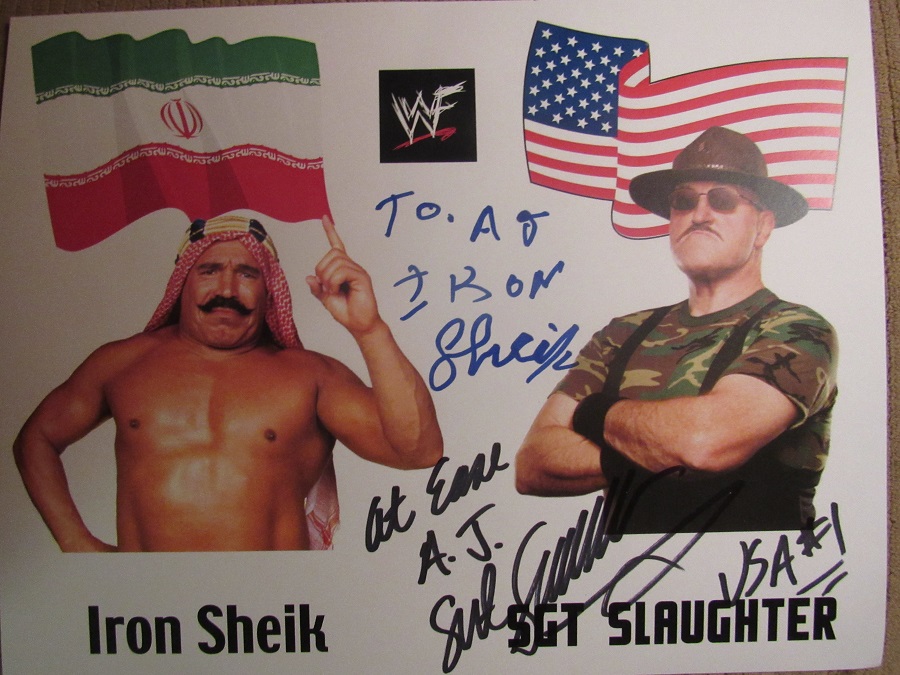 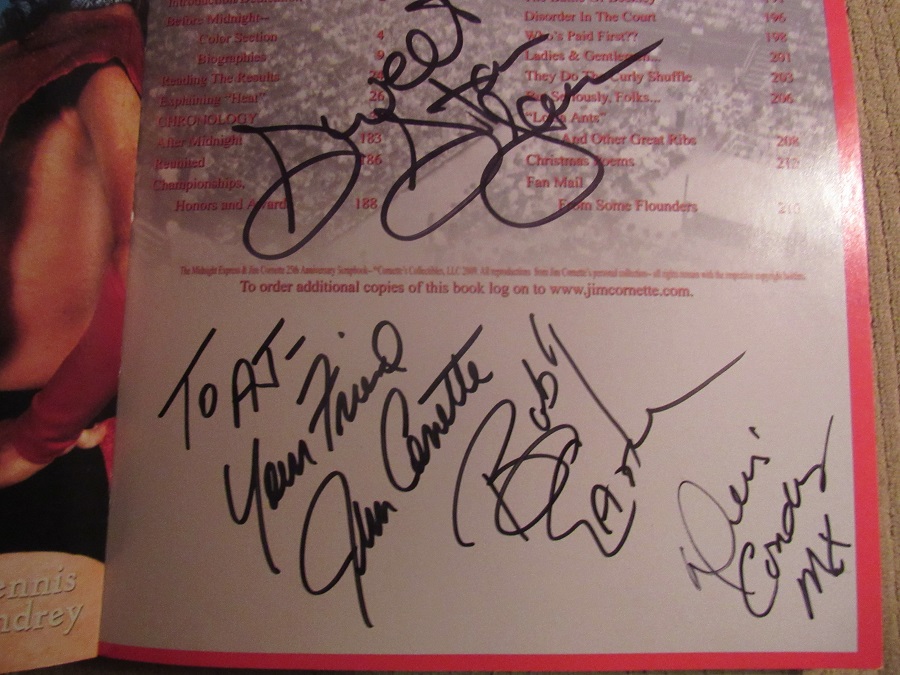 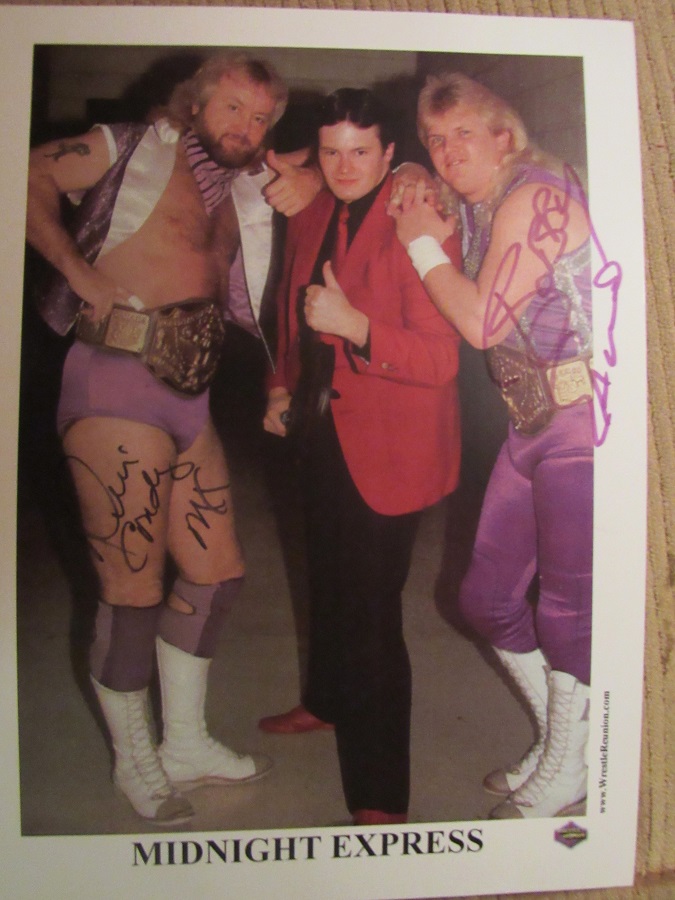 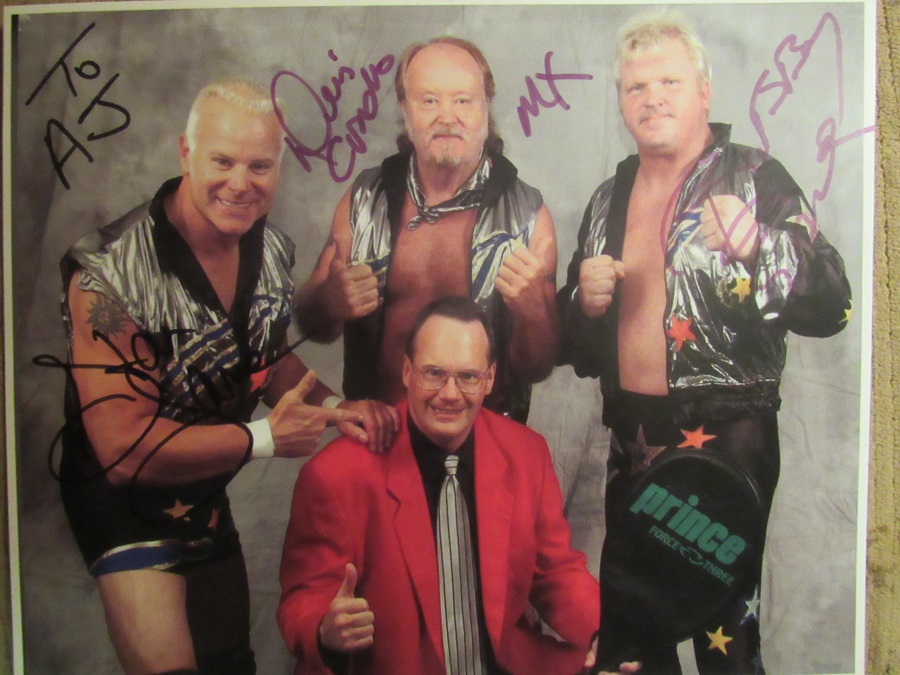 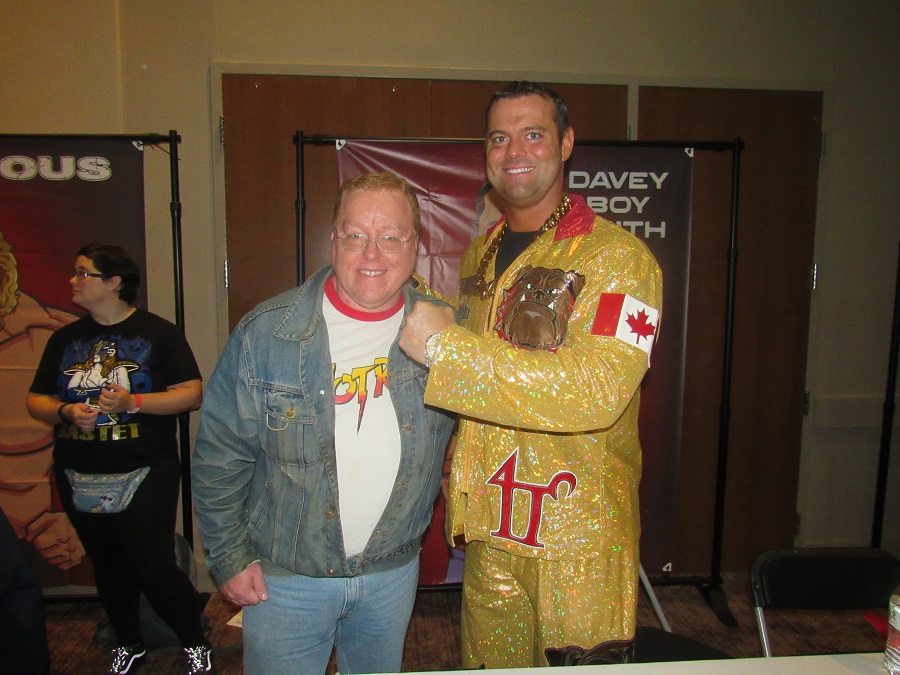 Me and Davey Boy Smith Jr. 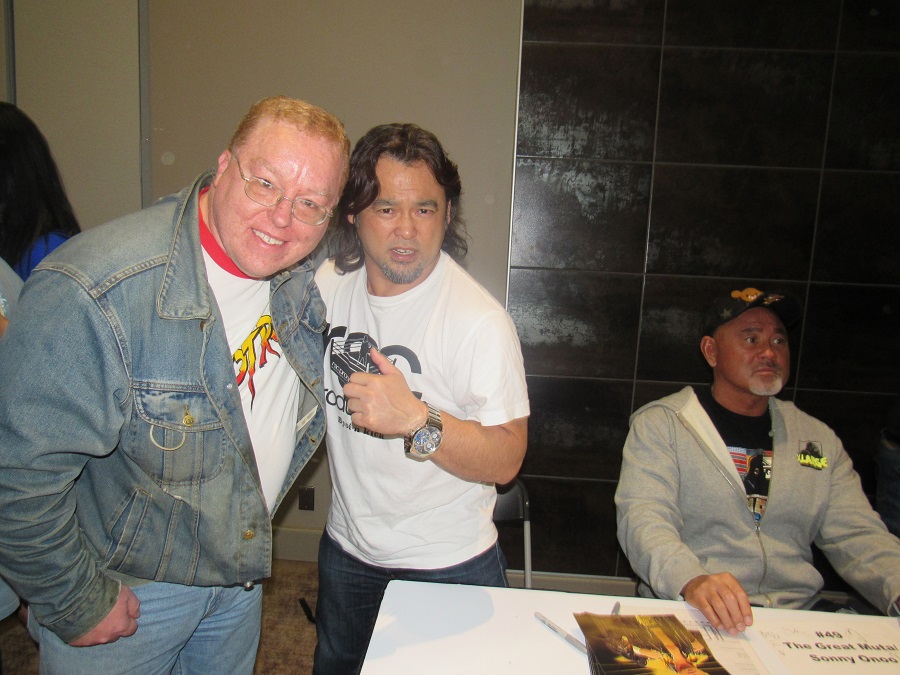 Me and Kaz Hayashi (with special cameo appearance by Great Muta) 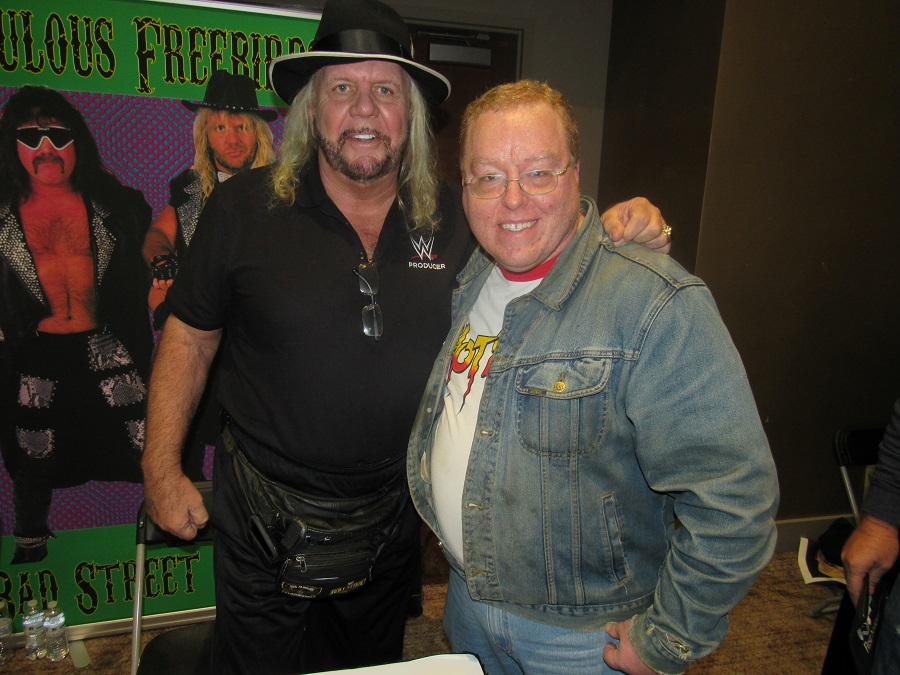 Me and Michael Hayes 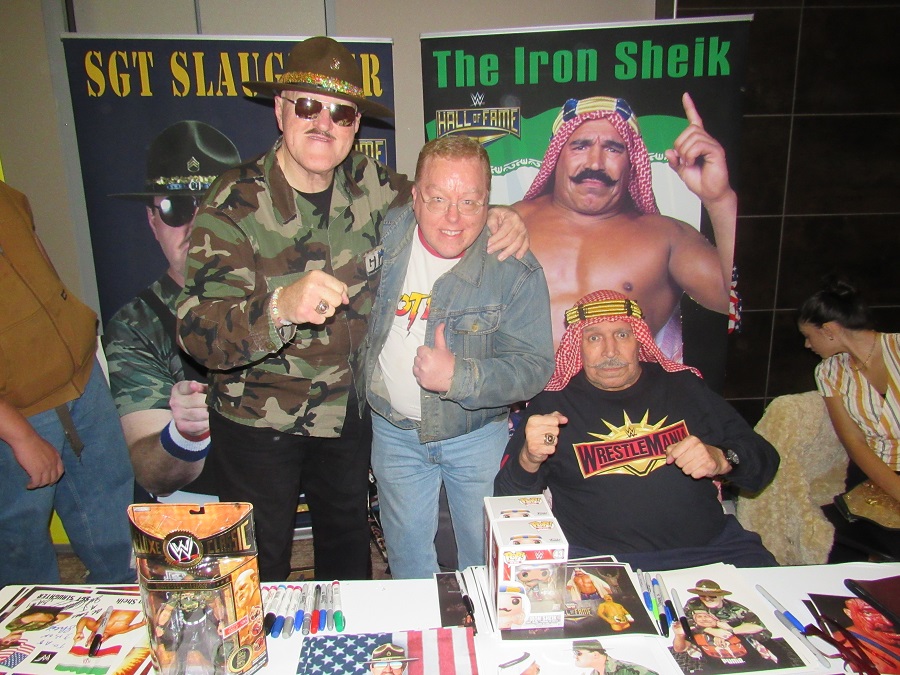 Me, Sgt. Slaughter and Iron Sheik 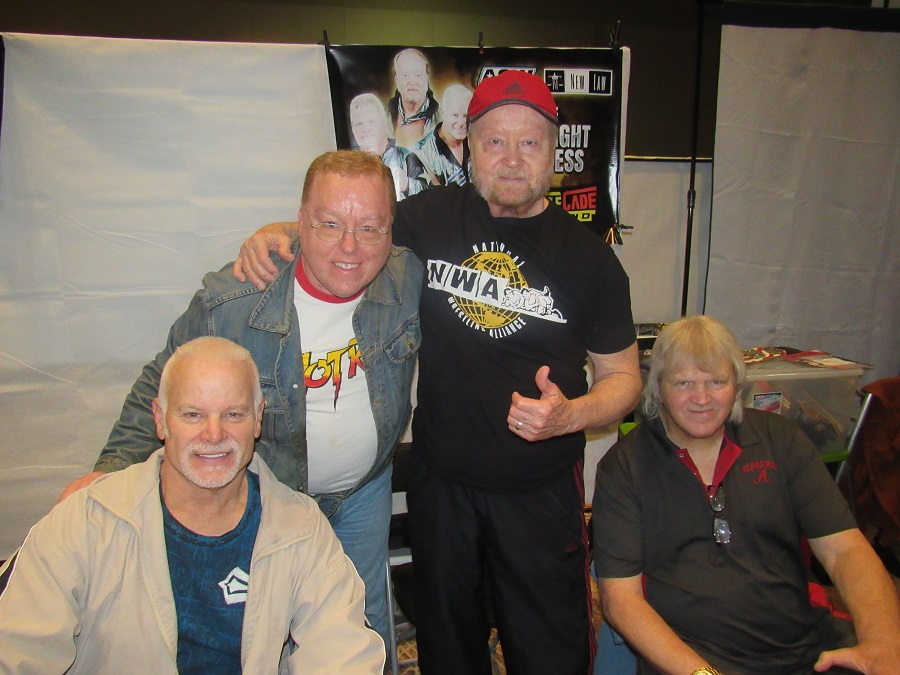 Me and all three members of the Midnight Express
Top

Cornette does limited signings that's why he didn't show here I think. Great gets!
Top

The symbols represent his father and then I'm guessing Owen, Bret and Anvil and also Brian Pillman as he wore that 4 symbol during his Loose Canon days. The gold doesn't really fit him but I haven't seen in him years on TV so I'm not sure.
Book WWE Hall of Famer Jimmy Valiant for your event!!
PM me!

Cornette has done wrestlecade before. He still promotes it on his podcast. He just says he’s too old to travel on thanksgiving anymore lol. He says he will probably do the gathering in August every year though.
Top

Excellent stuff! You don't see a ton of reports from this show, so it was nice to get a look at it and see what it draws like down there. Everything turned out great.
My collection:
https://www.flickr.com/photos/woodmo/albums
Top

great autos, and Kaz is a great name as well
Top

Awesome report! What was Sheik charging? I had issues with his promoter price gauging at WrestleCon
Top

jwill55nets wrote: ↑
December 8th, 2019, 9:25 pm
Awesome report! What was Sheik charging? I had issues with his promoter price gauging at WrestleCon

The dual combo (one graph from Sheik & Slaughter, plus the dual photo op) was $100, but I don't know what Sheik was charging individually.
Top
Post Reply
9 posts • Page 1 of 1