This is the place to post reports from signing or on the street meets
Forum rules
DO NOT post the location for on the street meets. To keep the spots from being too crowded, we don't allow locations to be posted. You may only post location details about pay meets and organized free signings.
Post Reply
11 posts • Page 1 of 1

Not much of a poster, but it always feels good to complete a project, so I thought I'd share (fair warning: I'm a bit wordy...).

In October 2005, I went to my first Chiller show, back when it was at the Sheraton Meadowlands and all the major guests were in the parking lot, under a large tent. Regardless of who you wanted, everybody had to wait in one long line that snaked around the parking lot. It took me three hours to get to the entrance to the tent, and just before they let me in, Captain Lou Albano, one of my main wants for the day, came out of the tent, seemingly done for the day. So, I approached him (for which I was almost thrown out of line) and asked him to sign the soundtrack to what was then (and still may be) the greatest wrestling movie of all time, "Body Slam" (shame on you if you haven't seen it). I forget where I found the album (I think at a store on W. 26th St. in NYC that used to be crammed full of weird stuff), but I'd had it for a while. And, though I'd met the Captain several times before, that day was the day I decided it was time for him to sign it. And he did. I would have paid him, but he didn't ask, so I didn't offer. And the Great "Body Slam" Soundtrack Quest had begun.

I forget exactly when I got Roddy Piper and Tanya Roberts to sign it (though I do remember Roberts seeming less than thrilled about signing it...might not have been her most treasured work memory), but I know I finally decided to get the Tonga Kid to sign it earlier this year. Over the years, I'd debated adding the Barbarian to it, but I ultimately decided against it (though if Teijo Khan had made the convention rounds, I'd have probably added him, as he's the main illustration on the cover). So, after getting the Tonga Kid, all that remained was the movie's star, Mr. M. Harry Smilac himself, Dirk Benedict. I know he's around fairly often, but it always worked out that either I couldn't make it or he ended up cancelling (he was actually supposed to be at that Chiller in October 2005, which is likely why I brought the soundtrack, but he cancelled at the last minute). So when I saw he was booked at WinterCon, I was in, even though there was no one else on the guest list I was really interested in.

After navigating the Great Casino Maze, I entered and immediately headed over to the autograph area to find Benedict. When I got to his table, there were only a few people waiting, so I hopped in line. And after a few minutes (and taking a photo for Greg at the next table over), it was my turn. And as soon as Benedict saw the soundtrack, I was immediately glad I'd brought it. He seemed as excited to see it as I was to have him sign it. The guy standing by his table said he loved the movie and that the album was the coolest thing he'd seen all day, and Benedict agreed. They talked about certain scenes in the movie as Benedict carefully looked over the front and back covers and reminisced about making the movie, including a story about him telling the Captain to use latex on his face for a scene where Smilac had to pull a rubber band off the Captain's face. The Captain laughed at the thought and told him to just yank the rubber band and pin right off his face. So he did, and the Captain started bleeding. And the Captain loved it!

As I was leaving the table, the guy standing by the table asked if he could take a picture of the album, so I told him of course. And then I realized he was Benedict's son. He told me how he remembers going through his dad's tapes (mostly old A-Team videos), looking for something to watch and coming across the VHS of "Body Slam," which he knew nothing about. So he asked his dad what it was and they watched, and he loved it. So I feel like bringing the album out brought back good memories for the both of them, and that always feels good to do. Makes it feel like more than just another business transaction. 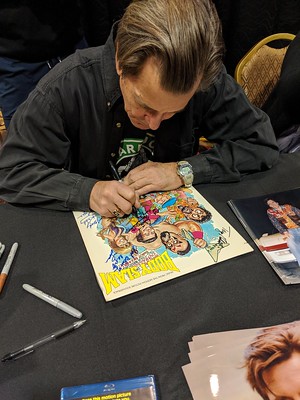 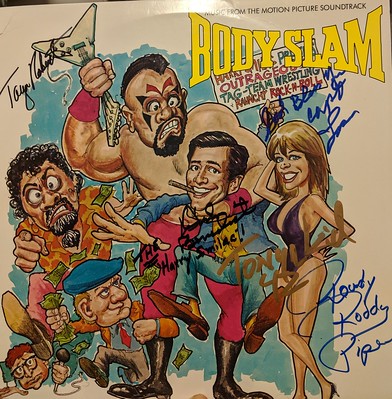 I never watched the movie, but I loved reading this. The album looks great and it is always great to read a report with some real sentimental value behind it!
My collection:
https://www.flickr.com/photos/woodmo/albums
Top

Really great piece. Are you gonna get framed?
Top

As soon as I saw the title of your post, I got excited and I will tell you why.

Around 1998/99, I went to a show by the Meadowlands that featured both Dirk and the late Richard Hatch. For a guy my age, an OG BSG meet and greet was a must. Both guys were terrific and they signed a beautiful pic of them which still to this day hangs in my office.

When I went up to Dirk, for some reason...even years ago...when I brought up "Body Slam"..same reaction he gave you. Lit up like a xmas tree! So on my BSG photo: one side says "PEACE! Richard Hatch. 'Apollo'. The other side says "Your man Harry Smilac aka Dirk Benedict aka

Love it! Great write up! Thx for rekindling some old memories!
Top

Wow, I had no idea that's what you were having signed! I thought you were just getting all the BSG people, ha. Great album! The artwork is terrific, never saw it before. Loved Body Slam as a kid, too. I saw it probably years after it was released, and only gravitated because it starred Dirk. He's likely so fond, because his career largely ended after A-Team, so this was I think his last starring role. Not gonna get Kellie Martin on there? Or John Astin, who I think is the caricature with the flat cap on the cover.
The Paunch Stevenson Show pop culture podcast : http://www.paunchstevenson.com
Top

That is really an amazing story. I think most guys like Dirk might prefer signing an item or hearing a story from a lesser known role than the one they're most famous for. He might have signed 99% of items from A-Team but it's your's that gave him the most happiness. His son was probably thinking the same thing. He sees and hears about his father being in the A-Team every day but it might be the simple role like Body Slam that he thinks most highly of.
Book WWE Hall of Famer Jimmy Valiant for your event!!
PM me!

Great story, billysparrow, and you're absolutely right--bringing back those good memories, especially for a father and son like that, is always a great thing. BODYSLAM was a criminally underrated movie. It basically tells the Rock & Wrestling story and would have been a major hit had the BTS bullshit and lawsuits not prevented it's release (and if Vince had gotten behind it instead of waiting to bet it all on NO HOLDS BARRED).

You could always add Barry Gordon (Sheldon Brockmeister). He voiced Donatello in the original Ninja Turtles cartoon and he's always at conventions. Just a thought...


Or John Astin, who I think is the caricature with the flat cap on the cover.

That's an awesome looking piece with a great story behind it. Congrats.
Top

Thanks for the kind words, everybody! And for the Dirk story, billybatson22!

I have a ton of signed albums, so I tend to rotate the ones I have in frames just to have something else to look at on the walls sometimes. I'm sure this one will go in one of the frames at some point. Those other names Greg and Gumby mentioned would be good adds, but I feel like the ones on it are the top 5 in the movie, so that's good enough for me. But I sure do wish I'd met Billy Barty and Charles Nelson Reilly (he's the guy with the glasses in the bottom left corner of the album). Barty especially; he's a Top 5 Guy I Wished I'd Met.
Top
Post Reply
11 posts • Page 1 of 1