Christmas in November... and it was PERFECT

This is the place to post reports from signing or on the street meets
Forum rules
DO NOT post the location for on the street meets. To keep the spots from being too crowded, we don't allow locations to be posted. You may only post location details about pay meets and organized free signings.
Post Reply
12 posts • Page 1 of 1

Christmas in November... and it was PERFECT

That’s right.. I said it and I’ll stand by it... Christmas Con 2019 was probably the best Con we’ve ever attended .. or at least the most easy going Con of the last few years. When tickets went on sale I jumped on them right away once Lacey Chabert was added. I was shocked to learn that this Con was considered a sell-out. I thought they maybe totally undersold the event and it would be completely empty once we arrived (bot was the wrong). As the weeks went on this show gained major steam from sponsors including Hallmark themselves. The promoters of the event went all out for this show.. they covered every little detail from wall to wall.. from wrapping garland around the guardrails, giving out candy cane, cookies and hot apple cider, to the gingerbread making contest, ugly sweater contest, carolers, to a Christmas tree which had snowfall over it every hour..

The main thing I loved about this show was... EVERYONE was in a great mood.. from the guests who all greeted you with a hug, the handlers, the line workers, the fans to the promoters who went around thinking everyone for supporting the show... it was amazing to see. Even lines with long waits were painless as everyone in front and behind you was friendly and talkative and in festive moods.

Now while this con centers around Hallmark Christmas movies, the people I wanted to meet I was a fan of from outside projects.

First person we met was Alicia Witt, who I liked in The Walking Dead. As mentioned before, greeted us with a big hug that was almost a strange feeling... haha. She was awesome, took a photo and thanked us for coming out. 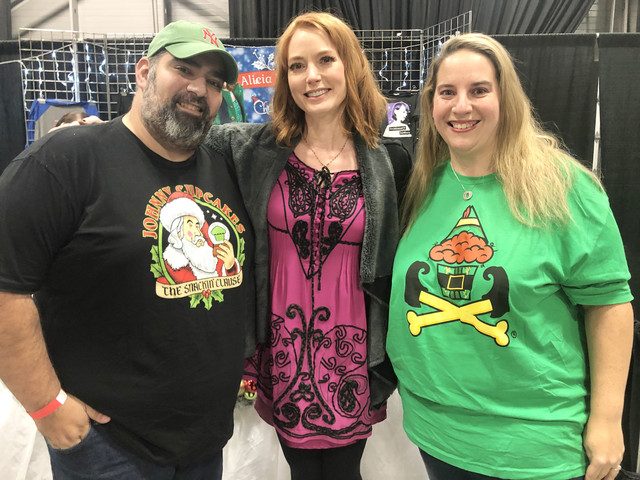 Next up was Jackee Harris, who (showing my age) I loved watching back in the day on ‘Amen’, ‘227’ and ‘Sister Sister’. At first she wasn’t at her table. He handler said she took a break since she had no line and would return in a bit. We waited on the the line for about 10 mins and the handler instead opted to text her to come back... within 5 mins she was back and took care of us. She didn’t believe us that we were 227 fans... thinking we were younger than we were.. haha. She was sweet and we moved on. 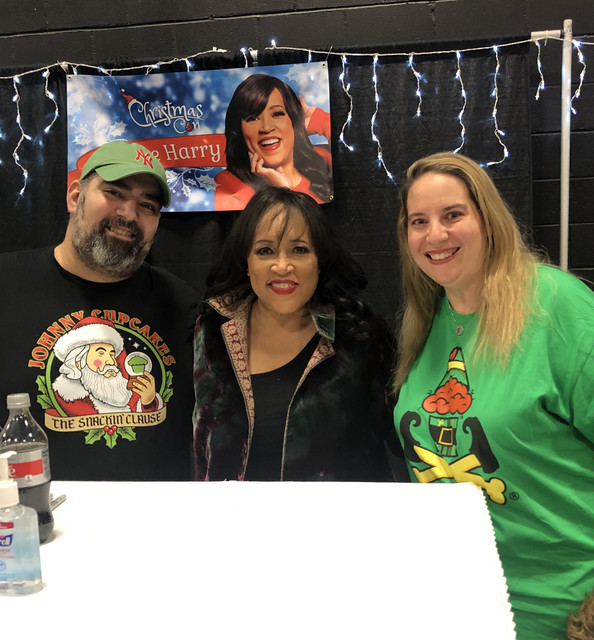 Next was actor Jack Wagner.. who I grew up watching on Melrose Place. He was very fan friendly and although he was persistent on doing a selfie (which I normally hate at a Con), the photo came out pretty cool. 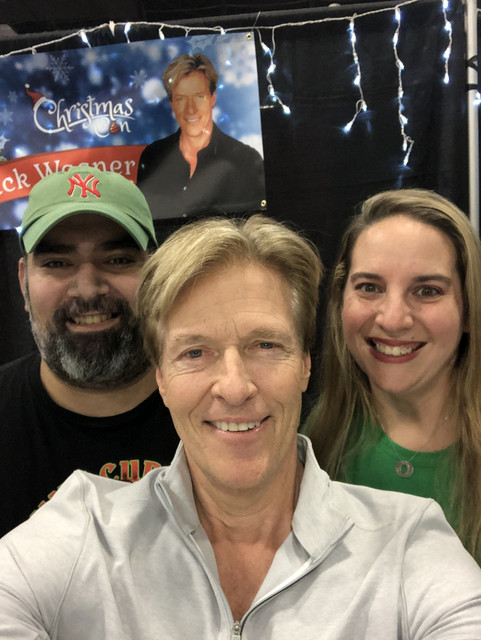 Next was Holly Robinson Peete. I met her years ago when she participated in Celebrity Apprentice, so I didn’t feel the need for a new opp. So Michelle went solo on this one. Again, very sweet and very happy to be there. 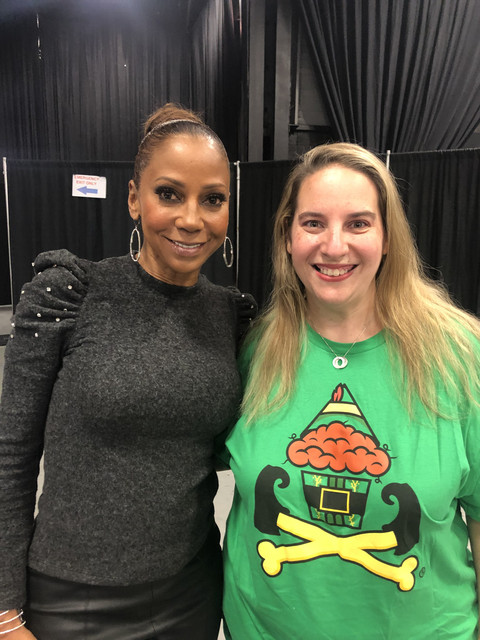 From there we went for Jesse Metcalfe... from John Tucker Must Die and Desperate Housewives.. his line was crazy and packed the entire time we were there. Again he took selfies himself but had it down to a science.. so no complaints here. Thought the Con and his line was insane but he loved it. 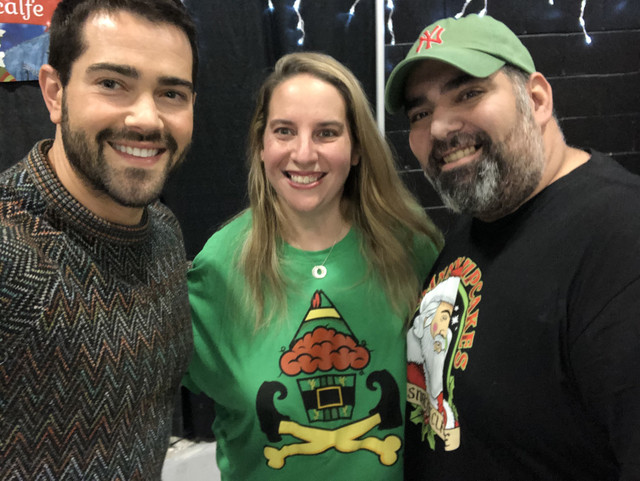 As we got on line for Lacey, which was the biggest draw of the Con.. I spotted actor Daniel Franzese, who was I believe a last minute addition. He’s probably best known for Mean Girls but I first was introduced to him in the Larry Clark film Bully... he was genuinely surprised to here that movie mentioned and told me it was his first Hollywood role, which almost traumatized him. It’s a messed up movie. 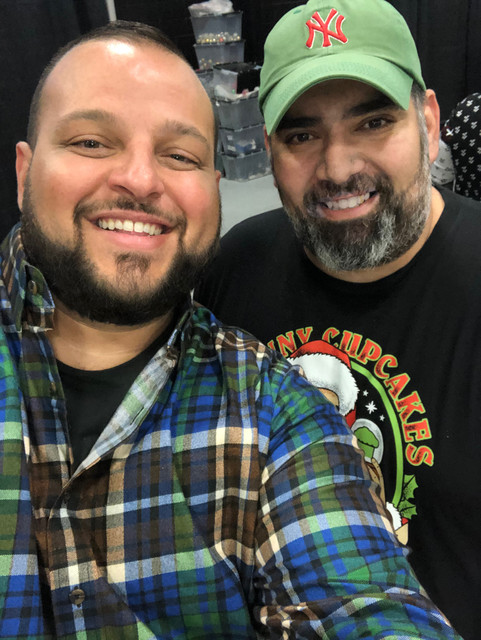 Back to Lacey.. I heard about Friday night being a mess to meet her but I know she stayed later to get thru the line.. Michelle and I waited about 45 mins.. she was fantastic with everyone.. again hugs, asking names and made sure you were happy with your photo. She was definitely my main want and did not disappoint at all. 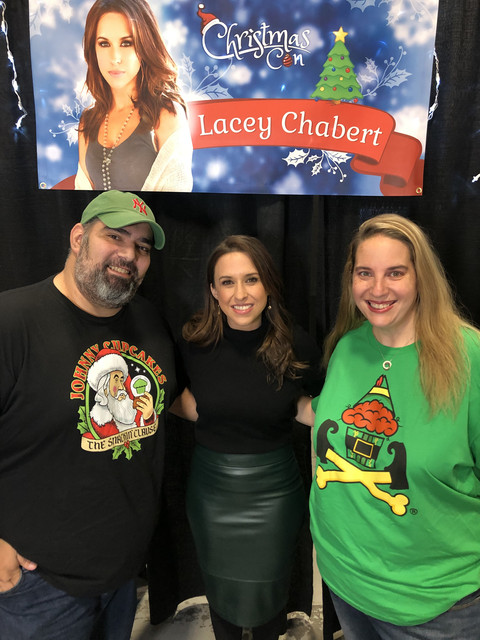 Next we got on line for Chad Michael Murray.. who again was pretty busy all weekend. At about 4:45 they tell us Chad has to go be a guest for the Ugly Sweater contest and would return in 45 mins... and in true ‘Con fantasy’ , the handlers gave us numbered post-it notes to come back and get right back into your place.... WOW !! Hah. Since we had time to kill we went to check out the contest.. pretty entertaining and Jonathan Bennett (the host) does a fantastic job.. cracking jokes and just an entertaining dude.. definitely became a fan of his just from watching him interact with the fans there. Once the contest was over, true to their word, we got right back on line and ended up about 10th on line as people gave up and left. Chad was great and greeted everyone with a smile and took 2-3 photos with everyone in line in different poses. Definitely a cool dude. 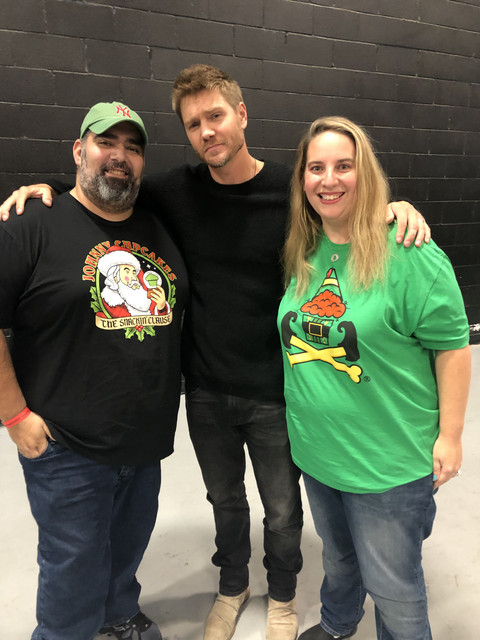 Lastly we met Jonathan Bennett from Mean Girls, Celebrity Big Brother and Cupcake Wars. Originally I would’ve likely skipped him but,again, since he was great in the sweater contest we wanted to get him. Right away he point out my Johnny Cupcake shirt and mentioned he too was a fan. Talked briefly about Big Brother and took a photo. 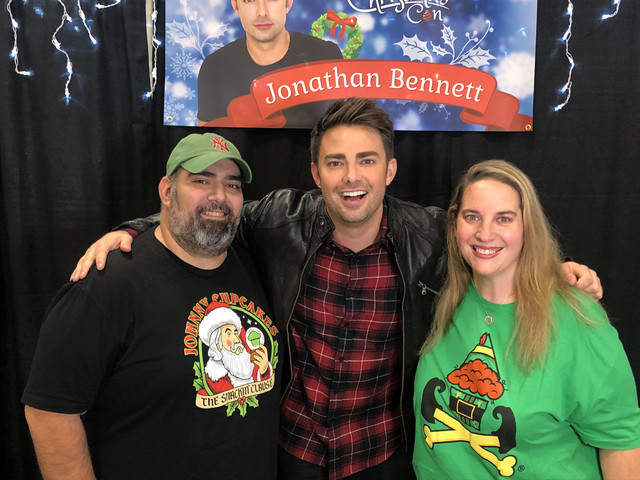 Once that was done we ready to head home.. took a few random photos just to document the Con and experience and heard out. As we were outside we spotted a guy dressed as the Grinch.. as a goof I went up to him to take a photo. He turns and sees me and says ‘hey I know you... you’re Internet Famous with your .... your Cupcakes shirts (my jacket was zipped up). We take the photo and says he’s now famous along with my Wrestling and Celebrity photos.. I questioned who he was and how he knew my info.. he laughed (all the while in Grinch character and voice) and told me through Instagram. He gave me his name on IG (GrinchGreetings) and I picked up on the fact that he’s likely a wrestling fan.. so I assume he’s a Con attendant and we probably all know the same people.. hell he’s probably a member on MO too. All in all a great time at this Con and will definitely go back next year. 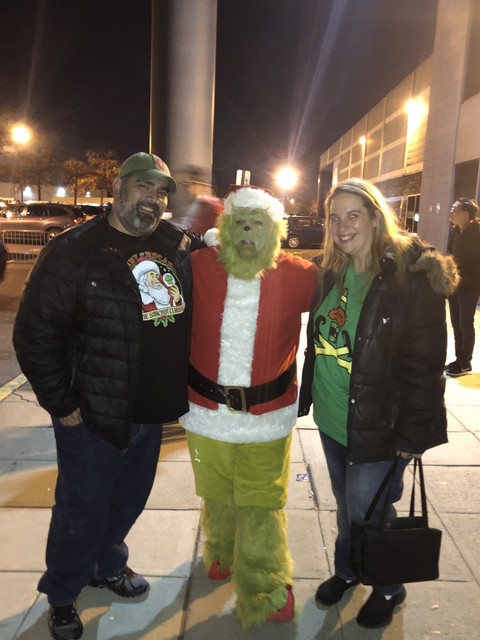 For the first time ever I read a Marked Out report aloud to my wife...and she loved it! The photos, too! Great great great report! Thank you for posting!
Top

billybatson22 wrote: ↑
November 10th, 2019, 6:13 pm
For the first time ever I read a Marked Out report aloud to my wife...and she loved it! The photos, too! Great great great report! Thank you for posting!

Hahah .. thanks man .. other ‘behind the scenes’ photos on my FB Page too
Top

Great report! Really they had a terrific guest list (I assume for Hallmark fans too) for folks like us. I went today, and yes, the place was packed and everyone was in a cheery mood. They probably should have rented the larger space. Franzese wasn't around today, he might have just been visiting.
The Paunch Stevenson Show pop culture podcast : http://www.paunchstevenson.com
Top

Greg2600 wrote: ↑
November 10th, 2019, 7:41 pm
Great report! Really they had a terrific guest list (I assume for Hallmark fans too) for folks like us. I went today, and yes, the place was packed and everyone was in a cheery mood. They probably should have rented the larger space. Franzese wasn't around today, he might have just been visiting.

I know Franzese was a surprise yesterday... showed up as a surprise during the Chabert/Bennett panel... yet he had an official banner... so not sure what the deal was.
Top

Excellent report! This really looked like a good time.
My collection:
https://www.flickr.com/photos/woodmo/albums
Top

looks like you guys had a great time! cool report
Top

This looked like a great con! Surprised to hear it went smoothly. Bravo to the creators for doing this right
Feel free to visit my blog concerning wrestling conventions, signings, and meet & greets!
https://squaredcirclecons.com/
Top

Awesome stuff and glad you had a good time! I've never gone to meet celebs at a con, but I thought about going for Lacey. Then it sold out. I don't know that she's done a con before. I think she was supposed to do a Wizard World a few years ago but canceled. Hopefully she'll do more seeing as she seemed to have enjoyed herself. Thanks for posting your report.
Top

Great report, yours is easily the bes experience I heard from people
Top
Post Reply
12 posts • Page 1 of 1