WOODMO's Finally Gets Both Luchas

WOODMO's Finally Gets Both Luchas

The past few months all my attempts to get both AEW stars Fenix and Pentagon of the Lucha Bros have been unsuccessful. First I had plans to get them at the Wrestling Universe, but that appearance was cancelled the morning of. Then I planned to go to a show in Nassau they were doing a meet and greet on, and the show itself was cancelled. Then I went up to Poughkeepsie and this group shot was one of the main reasons I went, but Fenix no showed. At this point I felt cursed on these guys and I was going to need more than faith Fenix would actually show up before making a significant trip again.

Then last weekend, they were both advertised for a HOG show in Jamaica which is only about an hour drive, so I was definitely intrigued but still skeptical. Then the morning of I saw Fenix actually post from NYC, so I figured he likely wouldn't no show if he was already in town, and since I was free in the late afternoon, I decided to take the drive in. I parked a few blocks away and walked over. There was a line already, but the damn show didn't let us in on time and we had to wait 45 minutes for the doors to actually open. Once inside, I made my way to their table and the group shot was a reasonable $30. 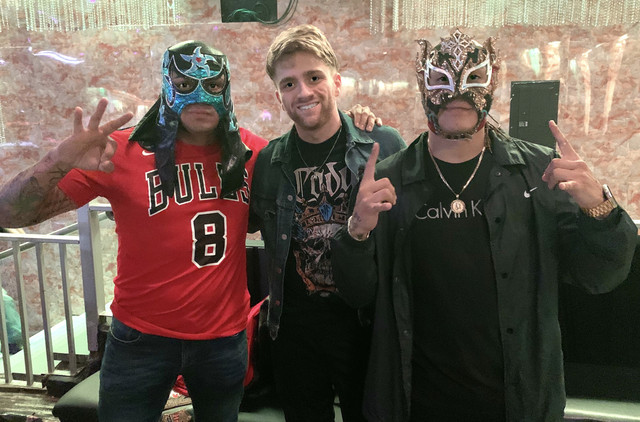 Finally these guys were both taken care of. AEW wise, I really only need Hangman Page of any real serious significance.
My collection:
https://www.flickr.com/photos/woodmo/albums
Top

Bizarre how these guys are so shifty
The Paunch Stevenson Show pop culture podcast : http://www.paunchstevenson.com
Top

Good stuff, bro! I got them at some lucha show at LaBoom years ago but I'm not too happy with the quality of the pic, so I'm thinking of upgrading soon.
Feel free to visit my blog concerning wrestling conventions, signings, and meet & greets!
https://squaredcirclecons.com/
Top