NYCC wasn't too big for me this year. Don't get me wrong, it had some big names like Rudd and Hiddleston, but I had them already. There were names I wanted, but my original plan was going on Saturday and I didn't feel like dealing with the crowds on that day and turn down the profit Saturday badges yield on eBay, so I sold my badge and planned on sitting the show out. That was until I began contemplating buying a Thursday badge and going in after work, and while I was deliberating, Kel Mitchel was added as a Thurs/Fri guest. I loved Kenan and Kel as a kid, so this pushed me in.

I made good time, parked in my usual Queens garage and caught the 7 train to Hudson Yard. I made quick entry into NYCC, got my badge at a line-less will call and then hopped on a line about 20 deep to get through security. Once finally inside, and this was easily my quickest entry yet, I found a bathroom and then texted Josh since we planned on splitting the Kel photo.

We decided to meet at the Kel booth, and as I was making my way there he called and told me to come back to the main lobby and join him on line for Superstore star Lauren Ash. I never saw the show but I heard enough good things that I plan on checking it out eventually, but it was free and I had nothing else pressing going on so I went over there. The meet and greet was really smooth, photos were allowed with a cool backdrop in the Superstore theme. She was also signing posters, which were being personalized. I didn't want the poster, but I figured I could probably flip it on eBay for a few bucks so I told her not to personalize it since I wasn't sure which family member I'd be gifting it to so she just signed it and added a thanks for watching inscription. 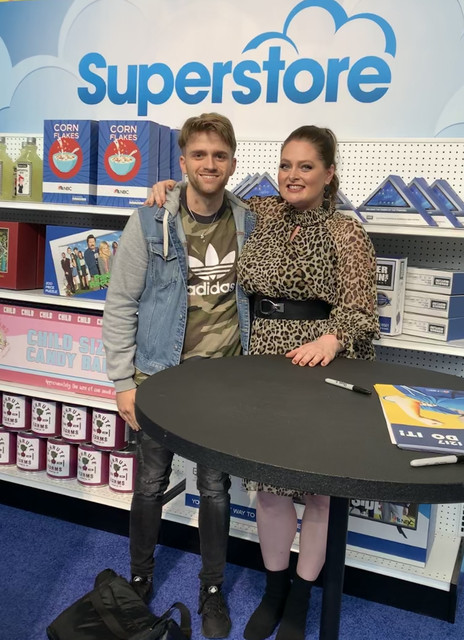 After this we made our way to Kel's booth. The price on Kel was a bit steep, at a whopping $60 for a photo. Now I never let a few dollars over the appropriate price keep me from getting a bonafide want, and this was no different, but I was glad Josh reached out wanting to split since $30 was much nicer than $60. The setup though was odd and left a lot to be desired. Kel was essentially boxed in behind the table and when we asked if we could come behind, they were hesitating. Kel initially wanted us both to be on the same side, across the table, with him behind it and leaning over. That just wouldn't work, so we kept asking to go behind and finally Kel said he was just going to walk around to take the photo. 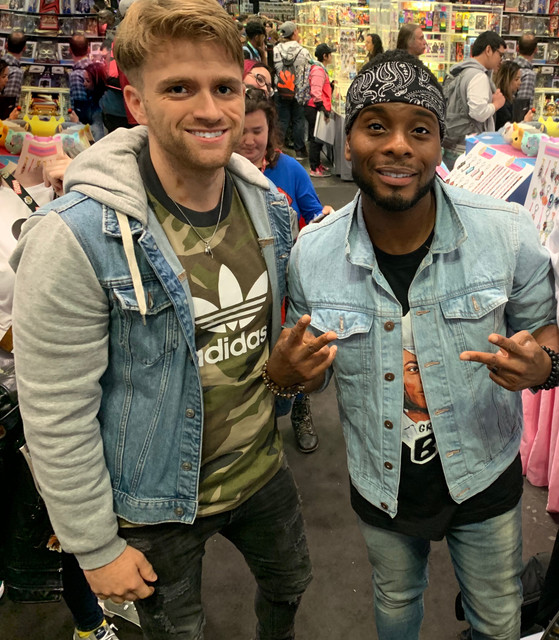 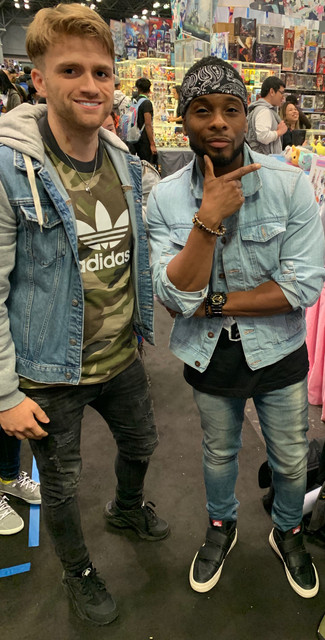 After this we walked back to the downstairs autograph area, where we decided to split one more photo. On the way down there we ran into Jerry and took a quick Marked Out selfie. 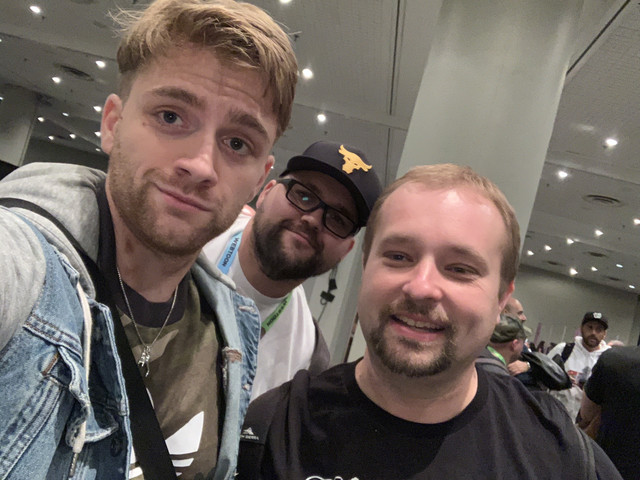 The photo we were splitting this time was Paul Reubens someone who I never got before. Lanza tells me I was at RICC the year he was there but I have no recollection of him being there. The other appearances were at shows I don't frequent, so while this wasn't a top want it was a name from my childhood I wanted. Paul was $80 for a table op, and I didn't really want to spend that on him so the $40 split worked perfectly. 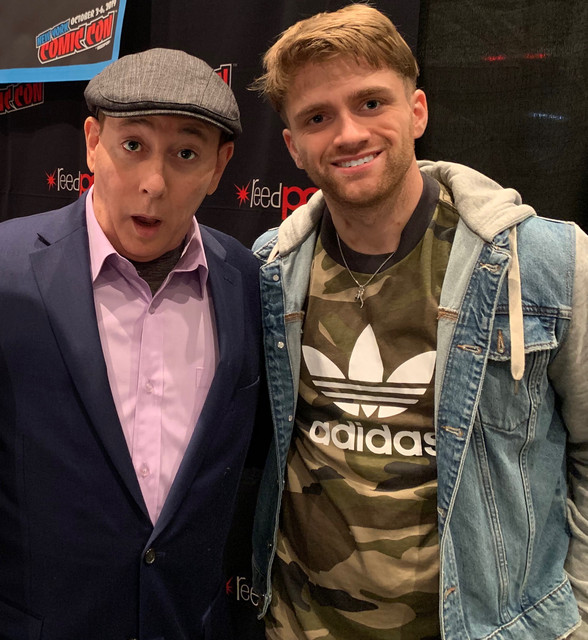 After this we said our goodbyes and I began checking some other names out. Some of the names I was on the fence over was Benedict Wong, James Marsters and Charisma Carpenter. Charisma I was going to split with Josh but she was on break until 5ish, and Marsters I just didn't feel like getting when there. Wong I made a slight effort on, but the line was capped until 5ish and I had no desire to spend hours there, plus I had one more big want remaining.

That name was Tom Kenny, who I passed on in the past, but since then my girlfriend has gotten me into Spongebob and I actually love the show, so I was really excited to meet Tom. My girlfriend actually asked me to get her an autograph, and while she supports my hobby she never has any interest in meeting anyone herself and actually getting any combos. This was different though, she LOVES the show and actually told me she wants to personally meet him in the future and get a photo. When I found his booth, which was in the panel queue room, the line was pretty deep and he too was on break.

Anyone that knows me knows that I don't usually have a ton to say to most celebrities when I meet them, no life stories for me, but he greeted me by my girlfriend's name because that's what the inscription said, so I corrected him and we got to chatting about how much she loves the show and how she got me interested in it too now. He was very nice, asking where she was and when I told him she was busy studying for a Physics exam he said oh wow, and gave me message for her which really made her smile. Tom seemed to make time for every fan and try to give everyone a personal memory and seeing many of the developmentally challenged fans ahead of me in line completely light up hearing him do the voice was really nice to see. 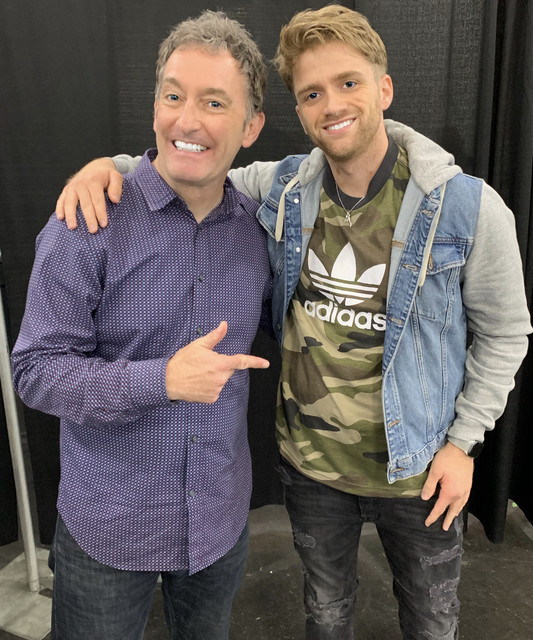 By the time this was done, it was about 6:45 and everything was pretty much shutting down for the night. So I made my exit, took the subway back to my car and drove home. Not a ton of guests for me this year, but a few really cool ones and I didn't spend a ton of money on randoms so I was actually pretty happy with it this year.
My collection:
https://www.flickr.com/photos/woodmo/albums
Top

Thanks again for the splits .awesome report hopefully you go to ricc
InstaGrams

Thanks! And no chance on RICC for me. Nobody nearly worth the drive on my want list
My collection:
https://www.flickr.com/photos/woodmo/albums
Top

Thanks! And no chance on RICC for me. Nobody nearly worth the drive on my want list

Was watching Paul Reubens from Jodi Benson’s line. He does some business. He def seems to interact more than I thought he would too so good on him.
Top
Post Reply
6 posts • Page 1 of 1