This morning I decided last minute to make the 30 minute drive to the Plainview Holiday Inn to meet Mets players Brandon Nimmo and J.D Davis. Nimmo likely has at least a platoon position next year in the outfield, and J.D Davis is probably their starting 3B since they won't spring for Rendon, so I wanted to get both of them.

This place can be sort of hit and miss with photos, especially if it's super big names appearing. A few months back when they had Pete Alonso who I need, along with Michael Conforto and Noah Syndergaard both which I do not need, pictures really didn't seem to be happening. Today was different though, I knew both players were nice and I didn't expect this to really draw like the others so I assumed they would be no problem.

I got there just about 11 which was when it started and I bought my tickets. Both players were $49 each for a flat, I opted for 8x10 of each which are on eBay as we speak, and I joined the line. The crowd was only about 50-75 deep I'd say, which was about what I expected. Brandon Nimmo was the first to arrive and he was over the top nice. He spent most of the signing standing up, and even asked fans who didn't ask him if they wanted photos. One guy actually rejected Brandon's photo offer which was kind of surprising to hear.

At this point, J.D still wasn't here and it was around 11:30. The staff finally made the announcement that he wouldn't arrive until 12:30. I had hoped to be home by 12 since I had skipped breakfast, but I knew my girlfriend was in the apartment just studying anyway so I didn't have any need to rush home, so the wait was doable. Finally he shows up around 12;40 and begins.Davis was typical signing nice, meaning he stayed seated and was nice, but nowhere near Nimmo level nice. Brandon was easily the nicest baseball player I ever met.

After this I made the quick drive home. You really can't beat an easy Long Island signing. I will definitely do more at this location in the future. 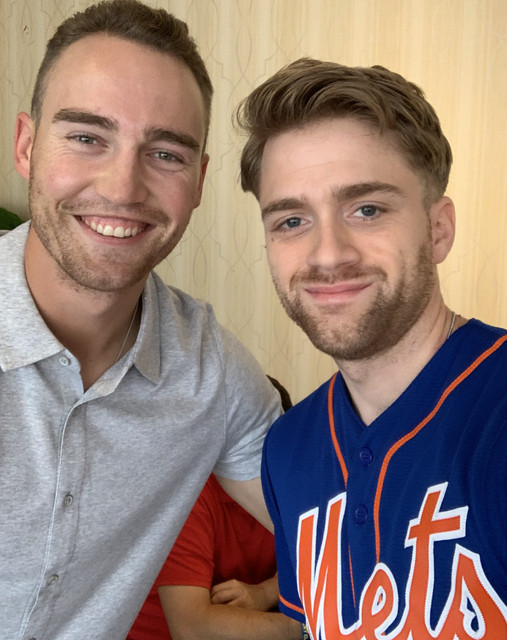 Great stuff. Thanks to this board I alerted a good friend of mine who’s a huge Mets fan about this signing. He took his son and it worked out awesome for them. Props to marked out!
Top