When we learned the second week of August would feature the Yankees facing off with the Blue Jays AND SummerSlam, we knew we needed to make the 3.5-hour journey. We had a great trip! Here is a report from our first day, Friday, Aug. 9. The event took place at the Metro Toronto Convention Center, which is centrally located near three outstanding attractions - the CN Tower, Rogers Centre, and Ripley's Aquarium.

General admission tickets were $54 including fees per person, per session, which I thought was quite reasonable. The best part? We had been told that people with GA tickets had to take selfies. Instead, we got professional photo ops with everyone we met. We were given a paper receipt with a QR code to scan. The pictures popped up almost immediately. It could not have been easier!

We tried our best to be on time for the 5 p.m. start, but arrived 15 minutes late. We waltzed up to the security area and were whisked inside. We were struck by the relatively small number of fans in attendance. Toronto has 2.7 million people! We saw Titus and R-Truth and decided to go for The Truth. Honestly, I think he's a future WWE Hall of Famer. The man has done everything the company has asked of him and done it very well.

The best part of our 60 minutes in line was that Truth was in character the entire time. He was the 24/7 champion then, and as he signed autographs and posed for photos, he kept looking behind the black curtain, making sure no one was sneaking up on him in an attempt to steal the title. When my daughter, Maeve, approached, he asked, "You haven't seen anyone wearing a referee shirt, have you?" Totally serious. It was fantastic. When I met Truth, I told him that he has brought such joy to people for so long and I wanted to thank him. I am sure he has heard that a million times, but he looked genuinely appreciative of the sentiment.

I asked R-Truth about Little Jimmy. He said, "Little Jimmy's with Carmella right now." I said, "Well, can I pretend he's right here, now, for the picture?" He replied, "Yes, sure! Carmella won't even know he's gone." Here's the photo: 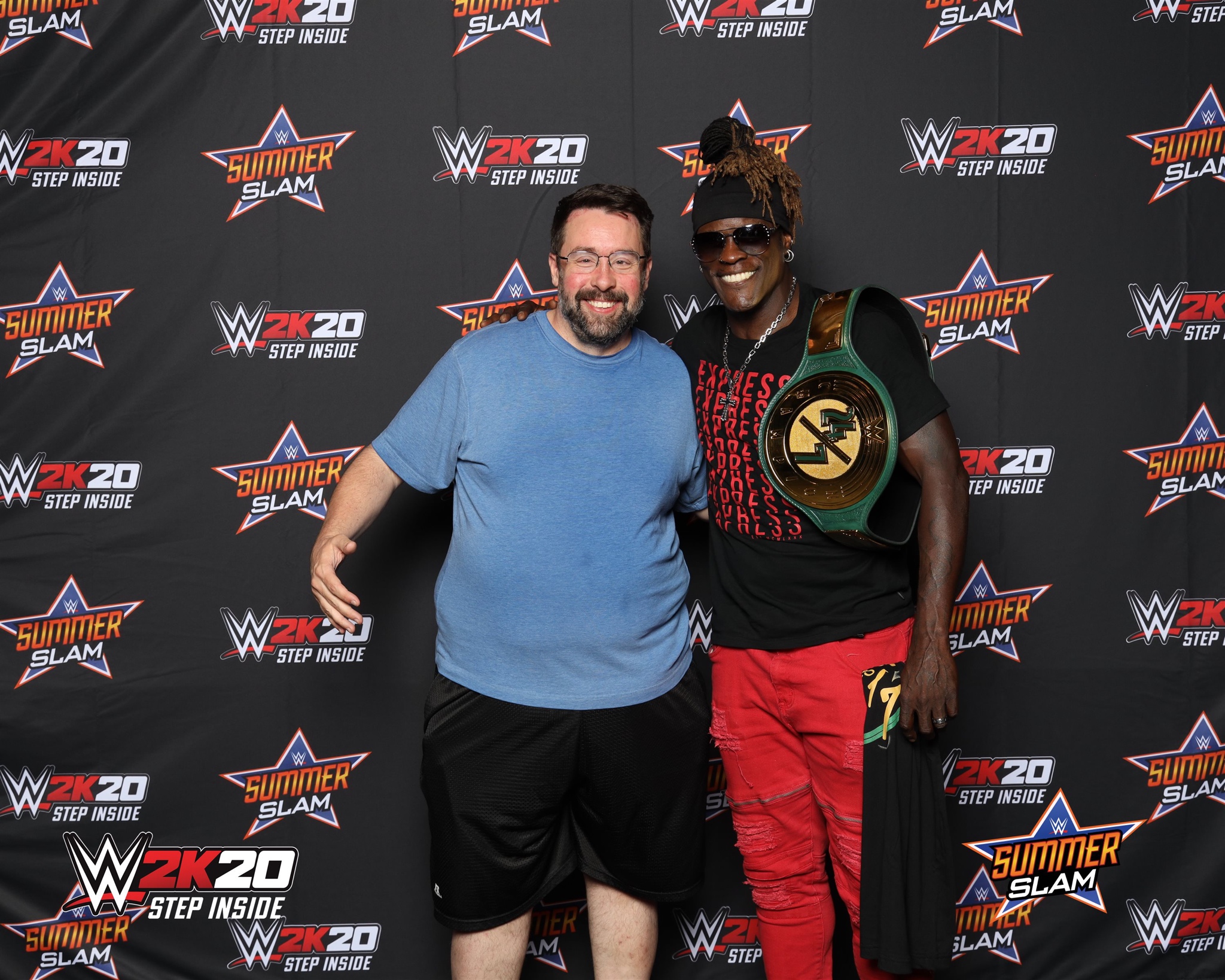 Unsure where the other wrestlers were situated, we wandered for a few minutes before getting into Natalya's line. Unfortunately, by the time we got remotely near the Queen of Harts, her time expired and she was replaced by Sonya Deville. This was disappointing to us, but we had mentally prepared for it during the 45-minute-plus wait. Each session is four hours, but the wrestlers - er, superstars - switch every two hours. Sonya was nice, but not as engaging as the other people we met during the weekend. I think she might simply be shy. As with R-Truth, my kids had her sign their WWE Encyclopedia, third edition. She did not have an entry so they used the inside cover page. Here is Maeve with Sonya: 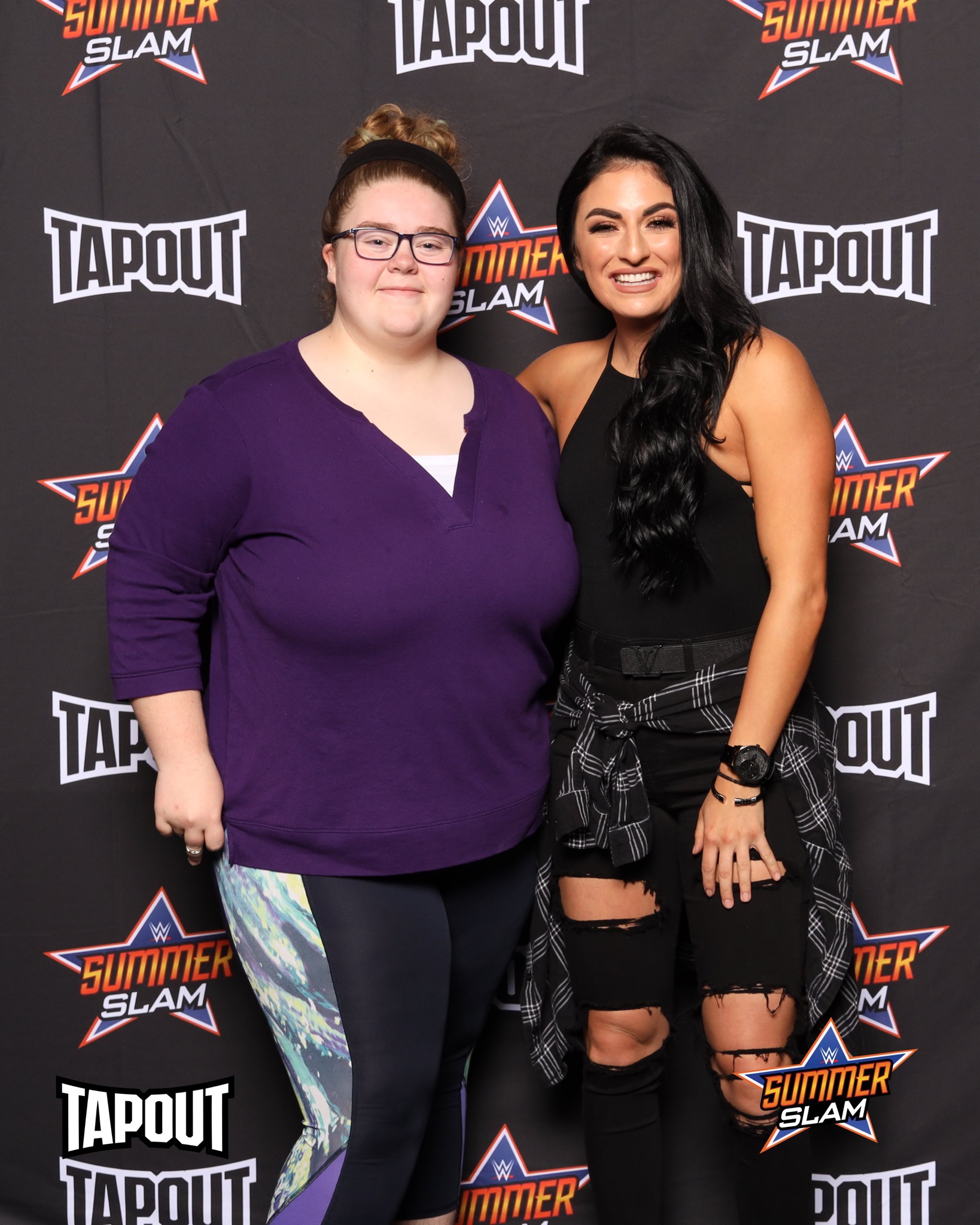 Friday's lineup wasn't as strong as the other two days, so we had to really think about who to see next. We hopped in Apollo Crews' line, and waited more than 30 minutes to meet him. He was friendly, doing his best to get everyone through the line quickly, but happily. I said, "Apollo, who was YOUR favorite wrestler?" He replied, without hesitation, "Kurt Angle, and it was a pleasure to be in the same ring with him." While the kids were getting their encyclopedias signed, I was handing everyone a Rawlings Official Major League Baseball to autograph. Here is me with Apollo: 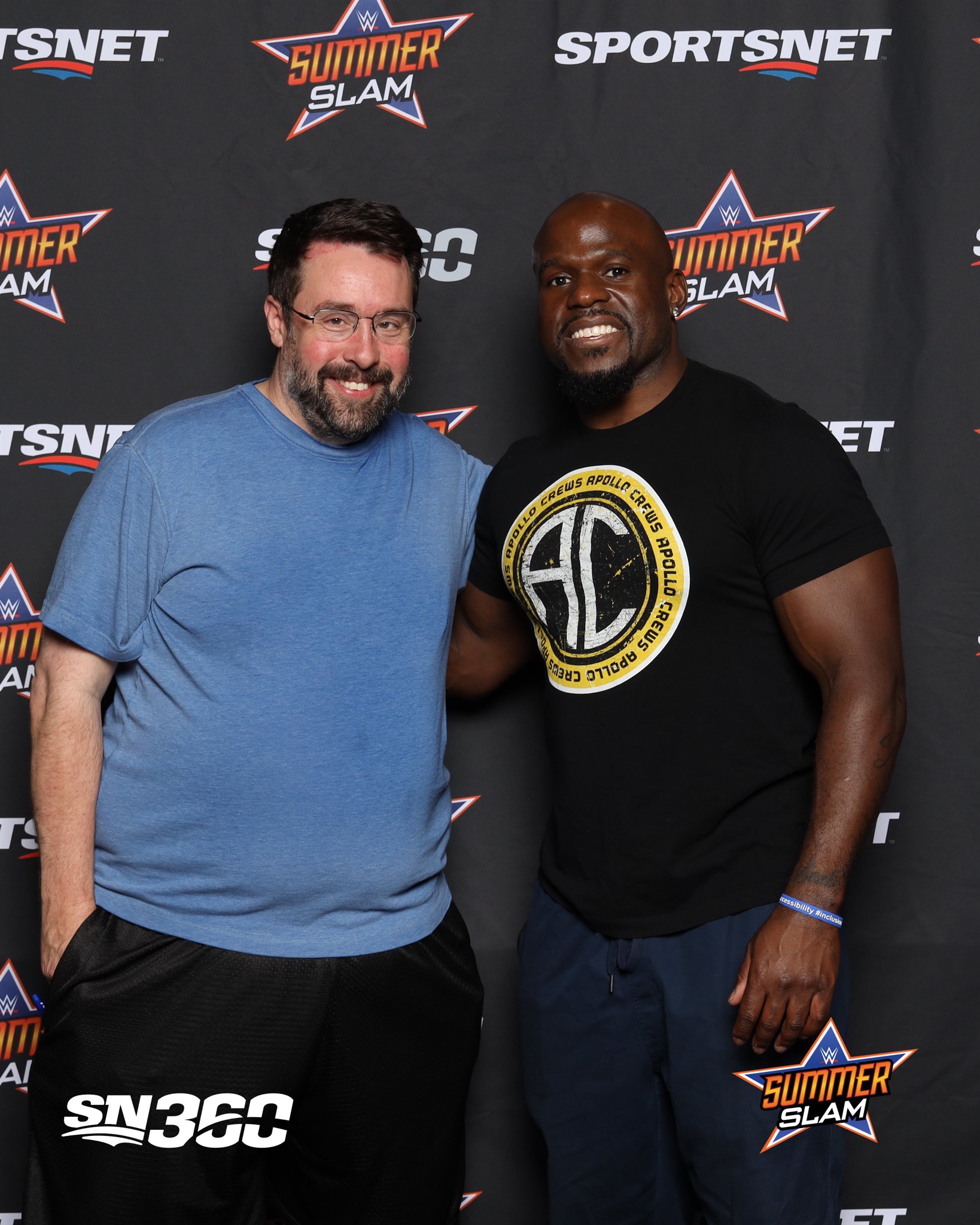 Adjacent to Crews, the line for Ali was growing so we jumped in as quickly as we could. He was a friendly guy. When I approached, I handed him the baseball and said, "Would you be willing to sign your full name?" He looked happy, replying, "I'll sign whatever you want. Did you like my post?" The post, I assumed, was his social-media call-out of WWE for making him drop the name "Mustafa." He signed the ball and he happily took a photo. This is Miles with Ali: 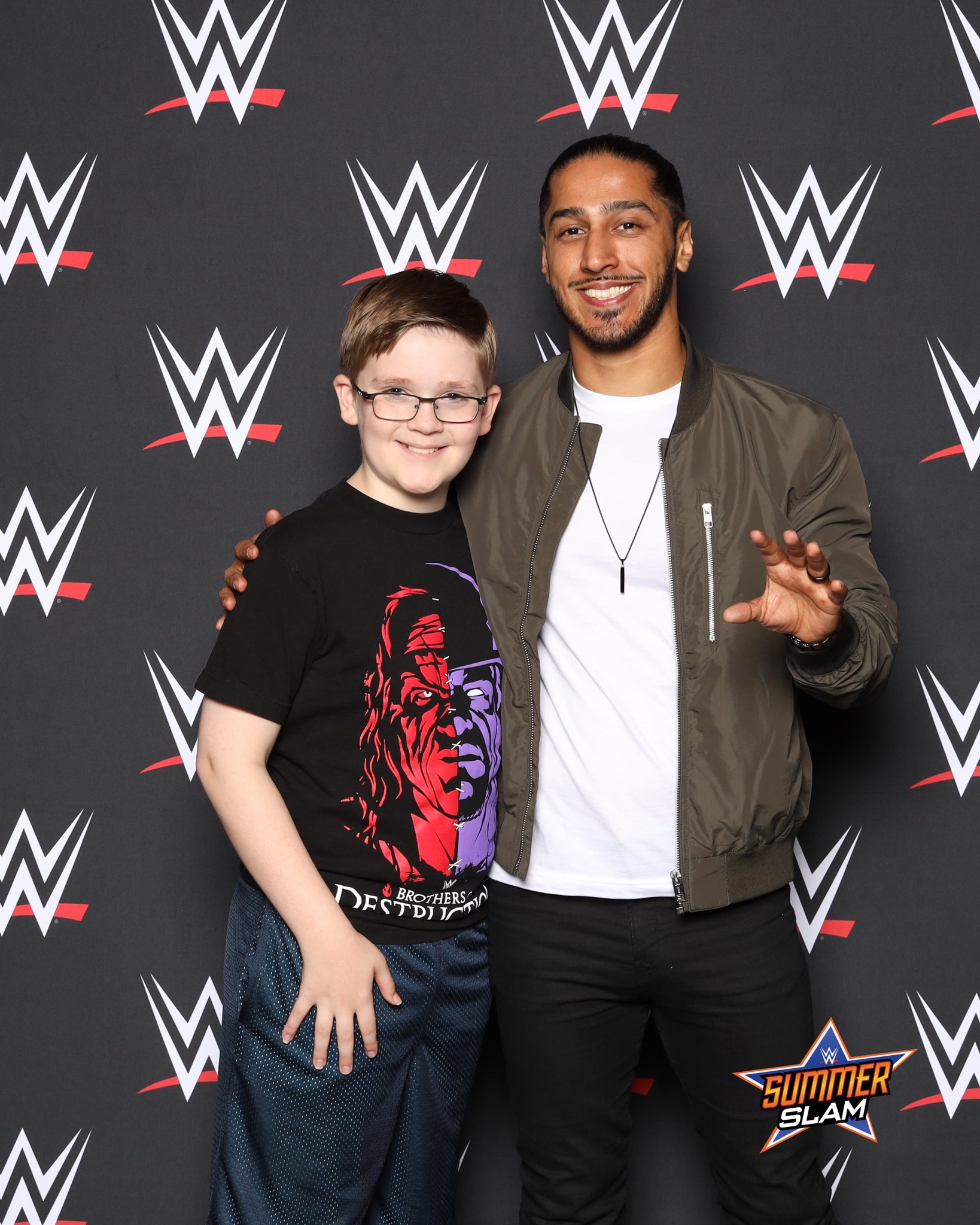 The event was nearing its conclusion, and we wanted to make sure we met five people before we left, so we picked the shortest, nearest line we could find and met Tony Nese. When I handed him my item, he said, "A baseball, huh? I was never good at anything baseball-related." I laughed and said, "I think it has worked out pretty well for you." He thanked us all for coming and seemed happy to have the fan interaction. This is Maeve with Tony: 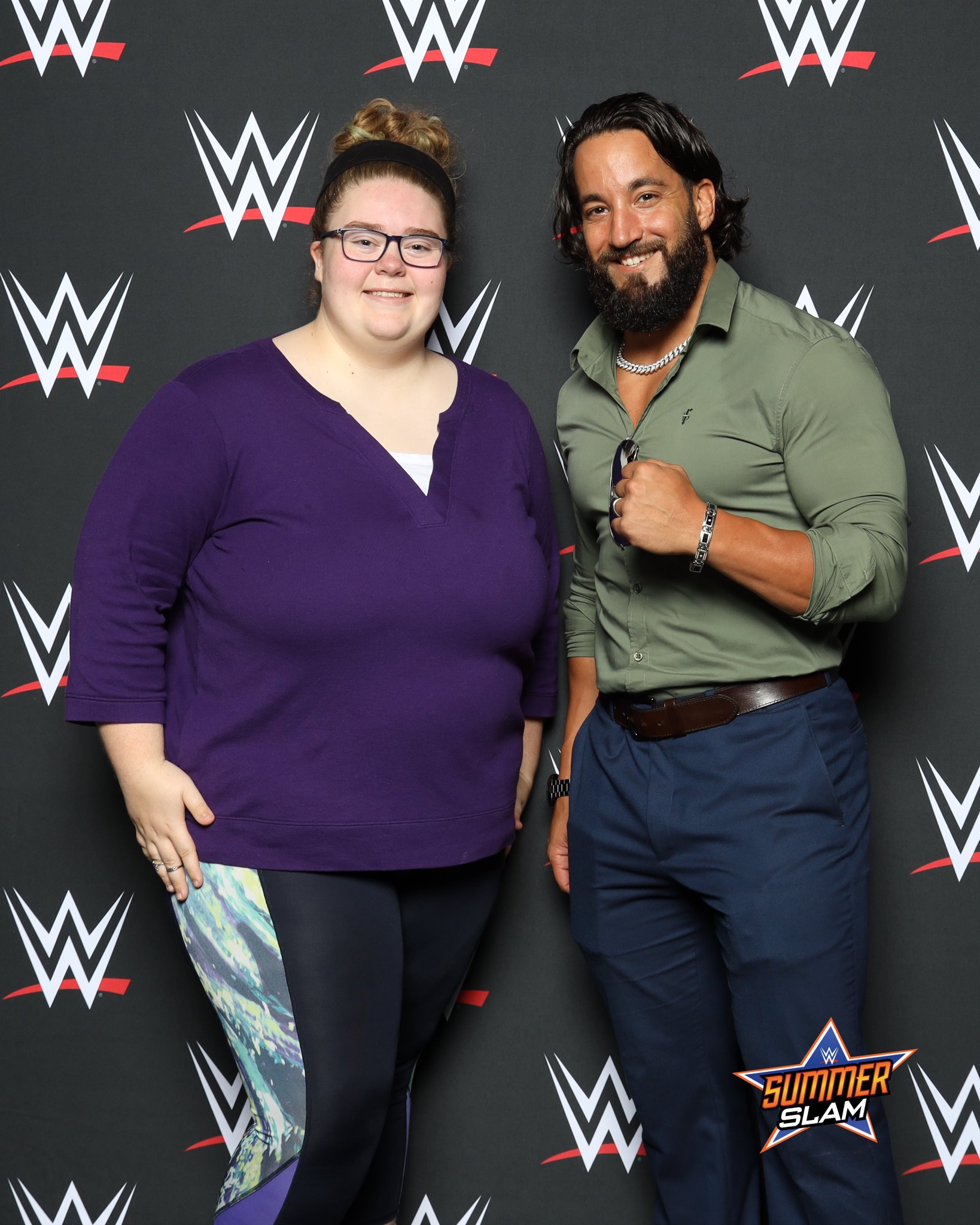 A true highlight: While we were waiting in Natalya's line, a huge roar came from the crowd on the other side of the building. People started racing to see what was happening. At first, we thought perhaps an unscheduled wrestler was appearing, but then I realized what must be happening: Someone was challenging R-Truth for the 24/7 title! As has been well-documented online, Drake Maverick dressed up like a child wearing a John Cena shirt and nearly pulled of the title change. R-Truth raced around the perimeter of the building, clutching the title as he made his escape. As many fans near us commented, it was very cool to have this happen during an event like this. It added a memorable moment we will never forget.

In case you missed it, here it is. I absolutely loved the video clip embedded in there by CactusJAJ. I thought of his issue as soon as I saw this go down... https://comicbook.com/wwe/2019/08/10/r- ... eet-greet/

Great pics. R-Truth really is a character, I remember at WrestleMania Axxess after I got his photo & waiting for whoever was next, he just broke out randomly break dancing.
Top

AWESOME stuff, my man! Glad you and your family had such a pleasurable experience.
Feel free to visit my blog concerning wrestling conventions, signings, and meet & greets!
https://squaredcirclecons.com/
Top

Thanks for the feedback, guys! It was a great day and R-Truth really was excellent. We'll never forget it.
Top
Post Reply
5 posts • Page 1 of 1