As always, the last weekend in July means it’s officially time to drop the puck in Chicago! 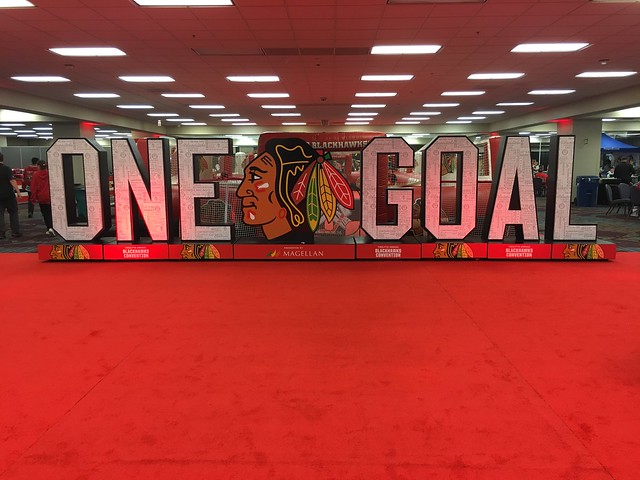 A little background on the Convention…the Blackhawks are the only team in the NHL to put on an event like this. The Convention is divided into six parts: general autographs, general photo ops, VIP autographs/photographs (Since it would be chaos to have Jonathan Toews or other top line players signing in the general autograph area…VIP autographs/photographs are limited to special tickets that are obtained either by staying in the hotel for two nights or Scratch & Win ticket winners), Q&A panels, a vendor room, and an interactive play area. During the day four general autograph sessions are going on at once (they rotate about every two hours) and two photo session (same thing…rotating basis).

General autographs and photo ops use a wristband system. 315 wristbands are handed out per autograph session and 150 wristbands per photo op session. Wristbands are usually given out about an hour or two before the session so you have to plan your schedule according to when you have to be in a certain line. You are allowed to wear two wristbands at a time.

VIP autograph and photograph Scratch & Win tickets were handled differently this year. Upon checking in at registration you were given the chance to “spin the wheel” (tap an iPad screen). A color or the words “Sorry, you didn’t win” flashed on the screen. If you won you were given a card that stated the time and place your VIP session was being held. After cross referencing the ticket color in the convention program you were able to see which player session you had scored. Another change this year was the Jersey Sale ticket. If you purchased a jersey at the Locker Room Sale you automatically got the chance to win a VIP autograph ticket for either Brent Seabrook or Calvin de Haan. There were also special offers for Season Ticket Holders (a photograph with Patrick Kane or an autograph with Alex Debrincat). Finally, this year you had to use your own phone/camera during photo sessions instead of the Blackhawks using their cameras and emailing you the photo.

My dad, Brandy, and I arrived at the Hilton around noon on Friday. Registration opened at 12:00pm so while my dad checked us into the hotel Brandy and I went downstairs to check into the convention. Since ticket sales were a little lackluster about a week before the convention it was announced if you were staying at the Hilton for two nights you were guaranteed to get either Jonathan Toews or Andrew Shaw as your hotel stay VIP ticket. It was pretty crowded downstairs, but the lines moved along. Upon checking in I got a Jonathan Toews ticket for my hotel stay VIP ticket. Yes! I was pumped to meet “Captain Serious” again. Brandy was hoping for Andrew Shaw, but we thought maybe my dad might get Shaw as his hotel stay VIP ticket. For the Scratch & Win ticket I won Purple (Patrick Sharp autograph). Sadly Brandy didn’t win.

After we put our luggage up in the room we joined my dad in the registration line. He also received Jonathan Toews as his hotel stay VIP ticket. Then there was a little confusion as the Blackhawks’ rep checking him in thought Brandy and I hadn’t done a Scratch & Win yet so we were all able to “spin”. We ended up with Teal (Patrick Kane autograph) and Black (Dave Bolland autograph). Not a bad way to start the weekend! 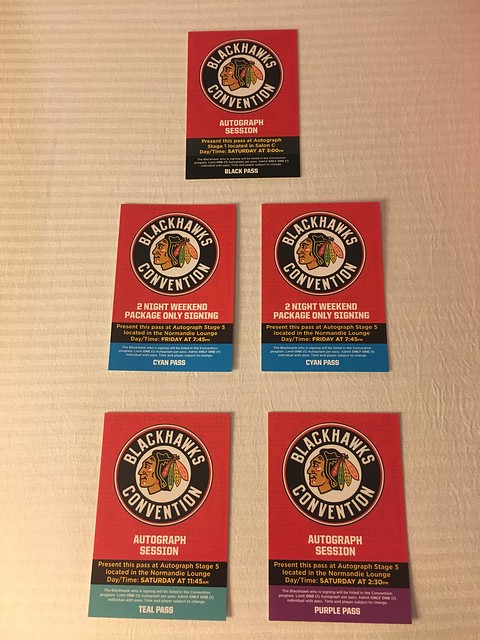 Brandy and I immediately hopped on Twitter to see if anyone was trading autograph/photograph tickets. We were willing to trade our Sharp and Bolland autographs for either an Andrew Shaw autograph, a Brandon Saad autograph, or a Brent Seabrook photo op. Since it was so early in the day Twitter was pretty quiet.

Around 3pm we were able to enter the Autograph Hall. My dad was interested in Nicholas Beaudin and new Hawks goalie Robin Lehner.

While he did that Brandy and I checked out the Vendor Room. Last year there were such great sales, but this year it was a little disappointing. To make up for that, though, there were plenty of games you could play to win fun merchandise (tote bags, scarves, pucks, coffee mugs, etc.) We also checked out the interactive play area. This year they had a social media lounge…which had charging stations, an Instgram photo wall…and ironically…terrible Wifi. 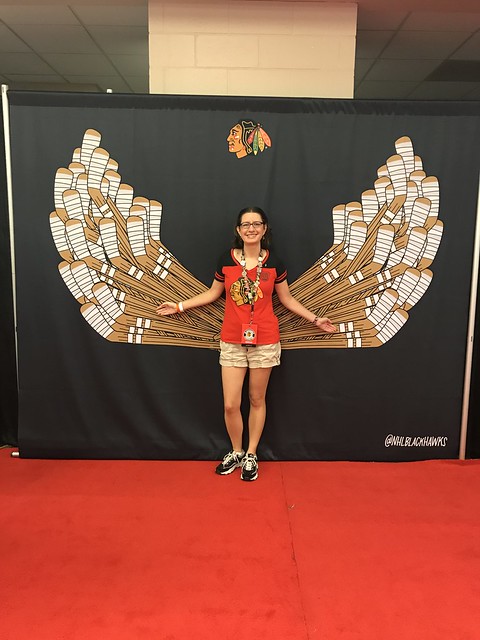 We stopped by one of the photo stages to get wristbands for Collin Delia later that night. I finally got a bite on Twitter. Someone was willing to trade me a Kirby Dach photo op for my Sharp autograph. Dach wasn’t someone we wanted, but I figured Dach held more sway than Sharp so we could hopefully trade up (that was a running theme with most traders).

Around 7:15pm Brandy and I got in line for our Jonathan Toews autograph session at 7:30pm. 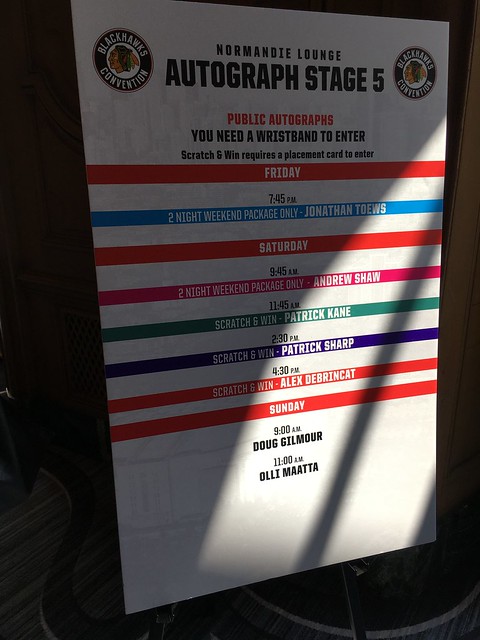 We were near the back of the line. Things were moving pretty slowly, but it was because Toews was taking selfies and chatting with the kids in line so we were okay with that. By the time we got up to the front security told us we couldn’t take photos, but I ignored that instruction and Toews gladly posed for the photo and signed my puck. 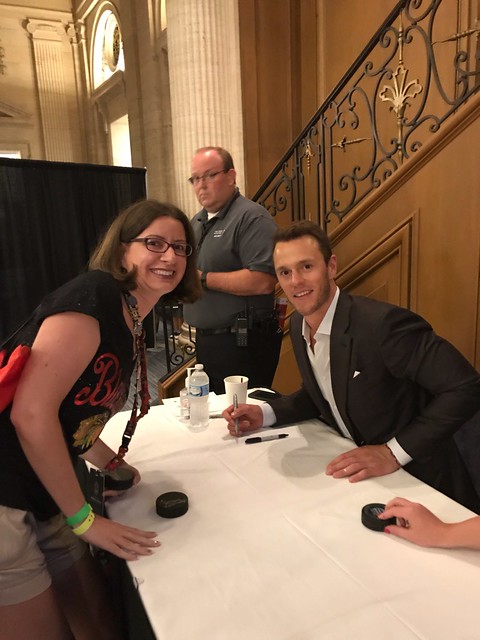 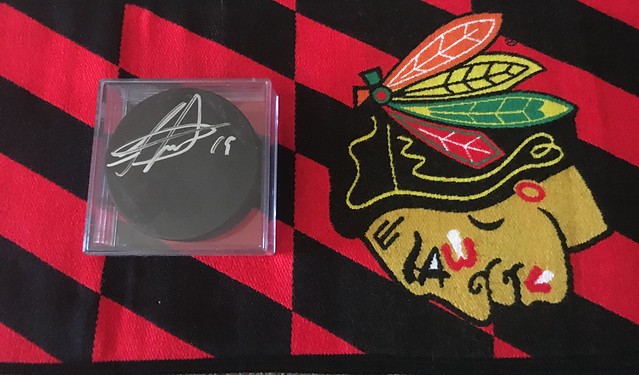 After we got out of line we ran downstairs to grab Aleksi Saarela’s autograph. 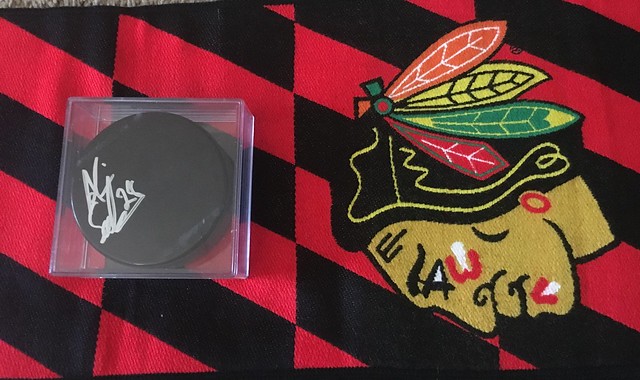 Unfortunately by the time we got to the Collin Delia photo op he had already left. He was doing another photo session on Sunday so we weren’t too worried about missing him. During all of this I got another alert on Twitter. Someone was willing to trade me their Brandon Saad autograph for my Kirby Dach photo op. Yes! After the ticket exchange we went to bed because Saturday was going to be an early day.

I’ve met almost all the players I’ve wanted to meet over the past decade, but one thing eluding me was a Patrick Sharp photo op. The hockey gods were on my side this year as Sharp was doing a wristband photo op session on Saturday morning at 9:00am (wristband distribution at 8:30am). I went downstairs at 5:30am and joined the line (I was #12). I was dreading the wait, but luckily my dad joined me and we chatted with our fellow linemates (who drove in from Arkansas). The time passed quickly and before I knew it I had my wristband and the session had begun. Sharp was very personable, shaking hands and making small talk while the photos were taken. Mission accomplished! 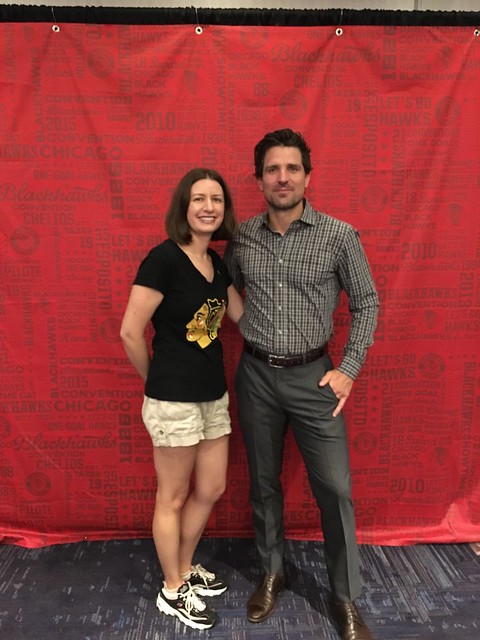 After breakfast I tried to get a photo op with Dylan Strome, but they were out of wristbands by the time I got up there. Then I went downstairs to meet Brandy in the Eddie Olczyk line. While we were waiting I got an alert on Twitter that someone was willing to trade me their Seabrook photo op (another want of mine). I told him I could exchange a Bolland autograph, but unfortunately he already had Bolland. So close! About ten minutes later I got another message…he was willing to trade the photo op for Bolland anyway because he could tell by my Twitter I was a big Seabrook fan. We met up and exchanged tickets. I thanked him about 1,000 times. I was so excited! It was nice to meet someone who just wanted to help out a fellow fan (unlike the people who were trying to sell their autograph and photo tickets for upwards of $100).

Next up was Brandy’s autograph session with Brandon Saad. I waited in line with her and then ducked out before she actually met him. She was so pumped as Saad has been just out of her reach for years (he was traded…he wasn’t attending the convention, etc). My dad was busy darting from his Patrick Kane VIP session to the general session downstairs (Ed Belfour, Kris Versteeg, Brendan Perlini, and Carl Dahlstrom). 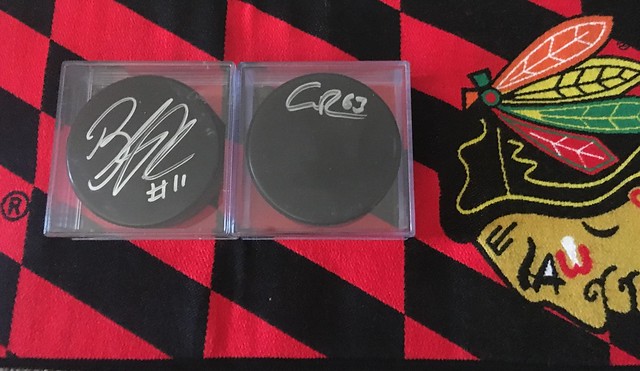 Around 3:00pm I got in line for my Brent Seabrook photo session while Brandy got a photo with Blackhawks Legend Denis Savard. Seabrook has always been my favorite player and he doesn’t attend the convention every year so I was so happy to be able to get a photo with him. The people who were in line ahead of me gave Seabrook a cookie shaped like a hockey jersey and when he handed it to his handler he told her not to eat it because he was saving it for later. The whole exchange was funny. When it was my turn we shook hands and he said it was nice to meet me. After the photo I said thank you and he said he hoped I enjoyed the rest of my weekend. It was an awesome experience. 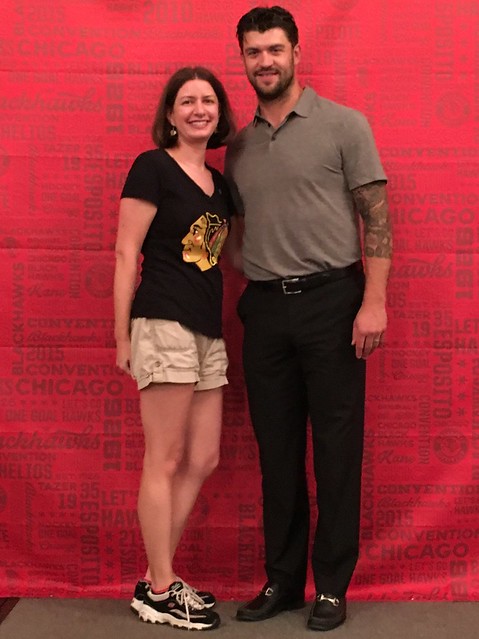 After that Brandy and I hit up some open photo sessions…Carl Dahlstrom, John Quenneville & Brandon Hagel, and National Anthem Singer Jim Cornelison. They were all very nice and the pictures turned out great. 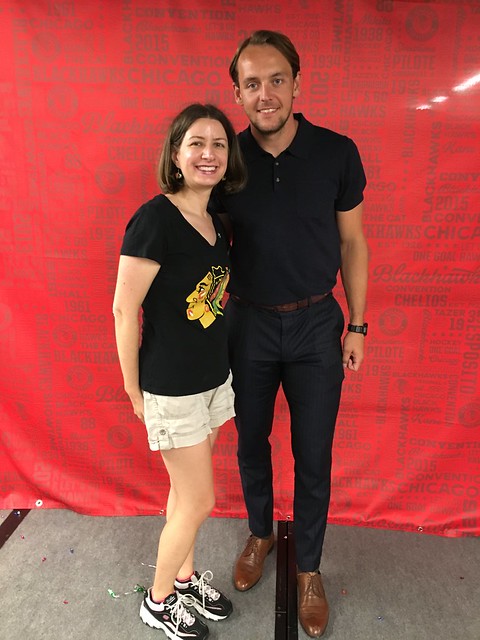 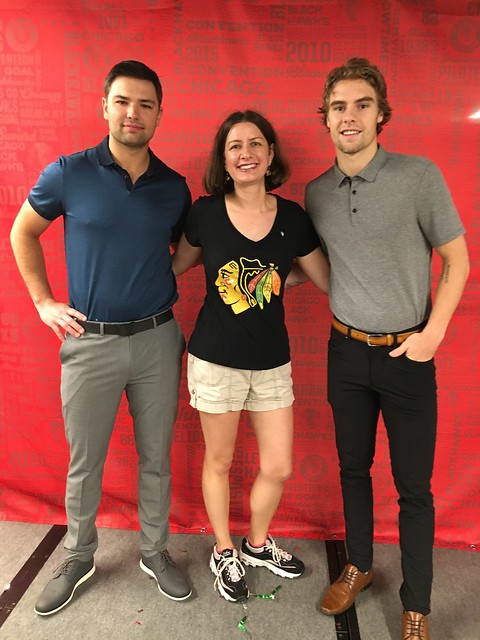 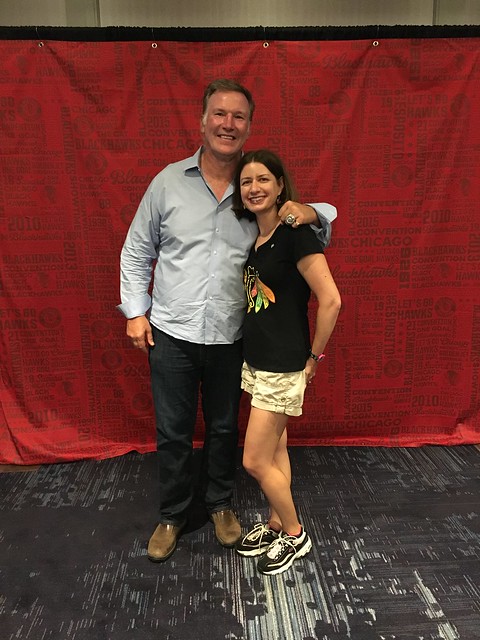 Sunday was pretty quiet. Brandy and I were able to get photos with Collin Delia (he was very nice and quite chatty). 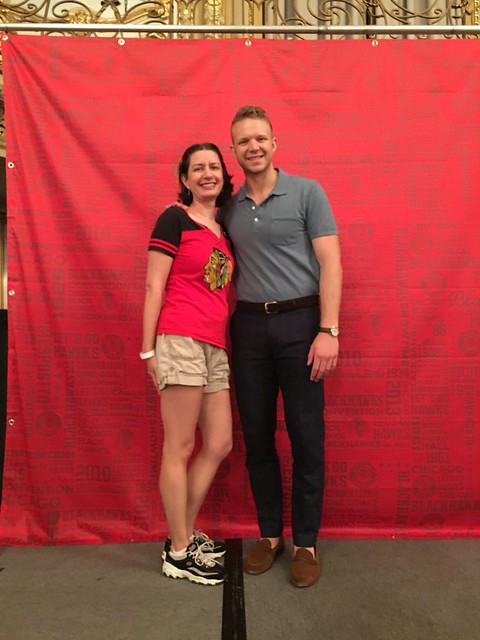 Calvin de Haan’s autograph table was next to Delia so we hopped over there and had him sign a puck. 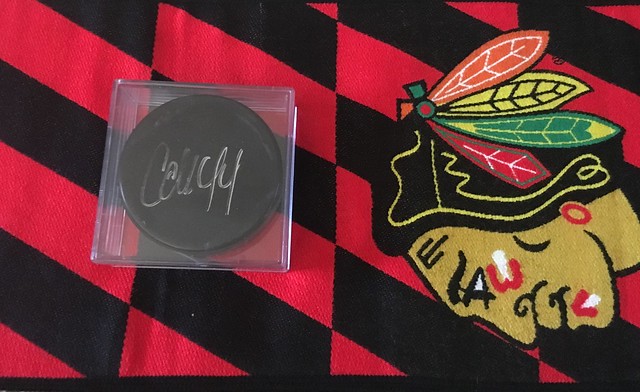 During this time my dad got a puck signed by Zack Smith downstairs. 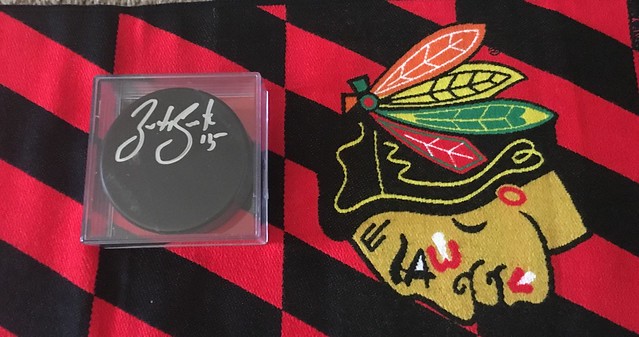 The biggest name I wanted that morning was former Penguin Olli Maatta. He was very kind and signed my puck. 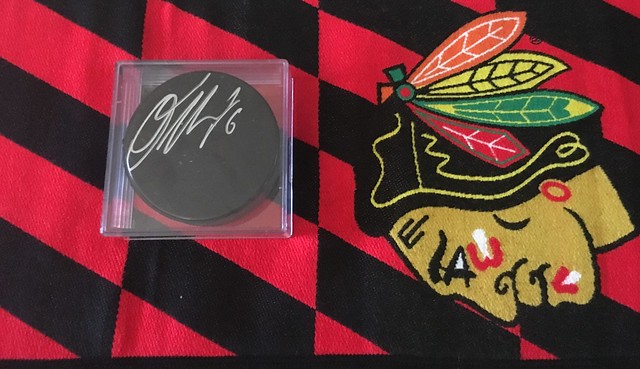 My dad wanted Adam Boqvist’s autograph and was hoping if he was able to get a photo op wristband he might sign a puck for him (even though autographs aren’t allowed during photo ops Boqvist was very fan friendly and was signing items…a nice gesture on his part). Unfortunately there weren’t any wristbands left, but he was able to flip a puck over the railing after the photo session was over and Boqvist signed it. 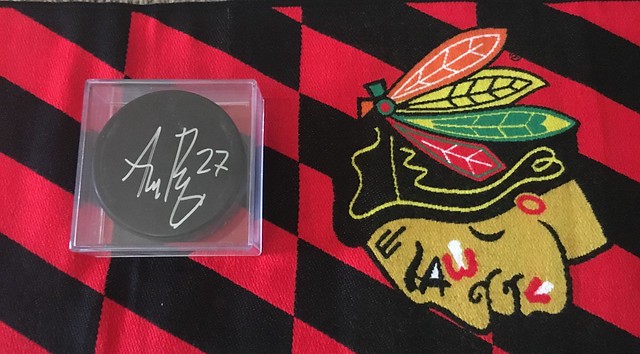 Things could not have worked out better (aside from missing out on meeting Andew Shaw…who was a hot commodity this year). I honestly think the system used for Scratch & Win this year is the easiest and fairest way to distribute the tickets. From the winning tickets we got to the trades we were able to make to all the awesome fans we had the pleasure of interacting with all three of us left the convention happy and totally ready for hockey season!! 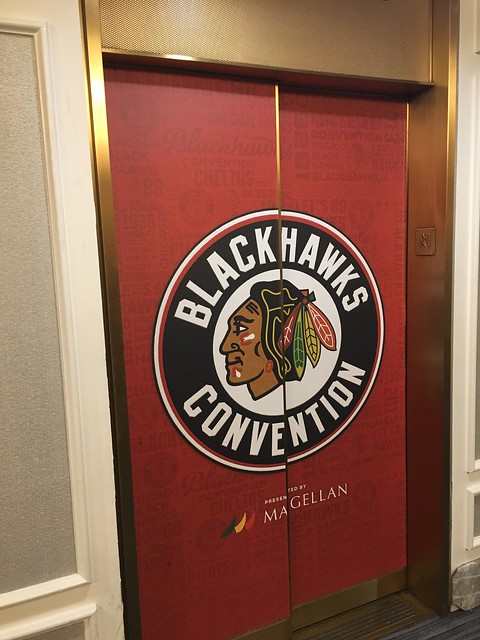 looks like a great convention, love the photos!
Top

I am not a hockey fan, so the names mentioned here mean little to me, but the OP’s passion is familiar! Really enjoyed your post, Vmars. Maybe it’s a sign of my age, but I would not have thought of hitting up social media to swap tickets. Strong move. And, that’s dedication, waiting in line for three hours to ensure a wristband. Thanks for sharing this experience!
Top
Post Reply
6 posts • Page 1 of 1