Well, as July arrived, it’s been a HOT one. Hit up a morning spot for Seinfeld guest stars Tim DeKay (Bizarro Jerry) and Steve Hytner (Bania). What sucked was that they and Soup Nazi and Mr. Peterman (had both) left out of different doors. We missed Hytner but got DeKay only because he stood there on his phone for 10 minutes. From there, I had one other stop. I wanted to wait for Billy Bob Thornton at a gig he had that night, hoping to catch him at sound check. In the meantime, I walk up town a bit to check a hotel he usually uses, but saw nothing. In the process of walking back, I spot an actor with his family who I know, and have wanted for a long time. It’s Jacob Vargas from Selena, Traffic, Airborne, etc. I didn’t want to really bother them walking along, but after a block or two, I noticed they were walking towards a hotel I knew. So I legged it to get ahead of them, and approached. He was super cool about it. After that, I waited a bit for Billy, and sure enough, he walked up. Dude is just so chill and the nicest guy in the world, too.

On another morning, I went to an early spot for Stranger Things “bad boy” Billy, Dacre Montgomery. He was super nice, and got the selfie. From there I went to another spot for Holly Robinson Peete (finally), but I had to wait awhile for her to leave. While getting the photo, singer Jennifer Nettles walked out, oh well. What’s funny is the collector I was with wanted Ivan Reitman’s daughter Catherine, because she was in some big 80s movies as a child. Granted she barely had screen time. I saw her, and was like, wait a second, I know that face. I took the photo, and glad I did, because when I checked her IMDB, I was like woah! She played the hilariously insane Maureen Ponderosa on It’s Always Sunny! Unfortunately, we walked to a spot for Stranger Things actresses Natalia Dyer and Maya Hawke, but it was mobbed. Maya stopped a bit going in, but the way out was a zoo so I didn’t get her. Too hot to stay in town all day, so I left.

Continuing on to the weekend....So I made the morning drive down to Shore Leave Con, taking about 3 hours, 20 minutes. Not a lot of traffic, but too much construction in Maryland that slowed me down. Along the way I picked up JOresky from his college town, and we headed over by 11:30. He helped me get in anyway. I see Lexa Doig and Michael Shanks, who I didn’t recognize at all, have tables near the entrance of the celebrity hallway. So Monster Mania also use this hotel for conventions, but they use both floors. This one used the bottom floor only, and stuck the celebs in the crowded hallway. If you were expecting Chiller-level conversation, wasn’t really happening here. Everyone was quite rushed. Both were $30 table ops, and I had little interest in autographs.

I’d heard that celebs were not allowing table ops when they arrived. Haeh??? However, after they did the morning pro ops, they were, which is obviously moronic. Anywho, the Smallville ones finished, so I grabbed a $20 pic with Aaron Ashmore (I still need his brother Shawn). Already had Laura Vandervoort and John Glover, so I just needed Erica Durance and I was done. Well, we walked by the table to head to the ladies room. After 10 minutes, she came back, was handed a menu, and LEFT! This was just after noon. Normally no big deal, but I really wanted to get out of there, so I could drive 3.5 hours back home to go for Brian Henson in Manhattan by 4PM. Well, that plan was shot, as she did not return until 1:40PM!!!! In the meantime I BS’d with Joresky, AJLe, and CMshowstopper. We were all aghast at the collection of oddballs around us, and that’s saying something coming from this group. Luckily Erica only charged $5 bucks for photos though!

In general, this was not an easy con for photo ops, as that hallway had terrible lighting, and my “convention” Nikon camera broke. The selfie Canon I used just doesn’t cut it for posed shots, oh well. As soon as I got Erica I bolted out the door and had to hustle around the whole hotel to get to the back where I was parked.

I was on the main road again by 1:50PM, and my prospects were not good. The Waze app was saying I’d arrive at the Tribeca B&N around 5:10PM, give or take. I headed home, averaging 80MPH with thankfully little traffic on I-95. I called the store around 4:25PM, and was told the signing started and there was maybe 2 dozen people there. D’oh, that’s not enough! I kept coming, and despite stopping for gas, knocked more and more time off the ETA. Slogged through the Holland Tunnel, and swung over to the bookstore area. Found a free spot a block away, parked and took off running. I went up into the store, and swung around the bend, and saw they were putting the chairs away, as it looked like the signing ended at 5 or even before. To my surprise, Brian Henson, Muppeteer extraordinaire, was still in the store chatting with a few people. I went up and he was nice as can be, signed my Farscape piece and did the photo. Didn’t even bother to buy the album in my haste. I wanted to bring something from the 90s Dinosaurs show but I couldn’t find my trading cards the night before. After that I headed uptown, waited at a spot for an actor but didn’t see him so I went home. Good thing I did, because not much later there was a major midtown blackout, and I would have been marooned. 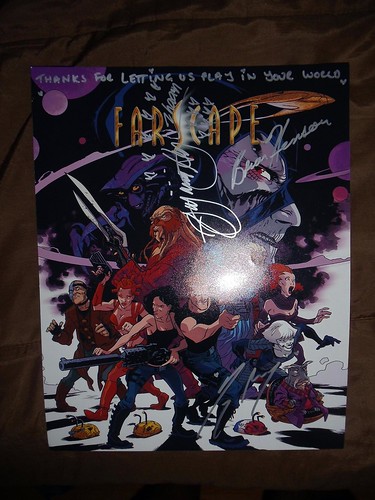 Epilogue, in my haste I failed to check any personal details on Henson. I mean, why would I? I knew his work. Well not doing so led to an AWFUL miss, that of his wife Mia Sara from Ferris Bueller!!!! A few days later, I happened to check his wiki page, and saw they're married. Immediately, it hit me that one of the women with him was her. I am 97% certain it was her. Usually I recognize randoms pretty well, but it was one of those cases where I had zero inclination to even expect her. Will be a tough one to live down, as she is fairly rare now.

Awesome pics and great hanging out Saturday.. glad that you made it back in time to meet Brian Henson, I met him years ago and hes a really nice guy.. that sucks that you missed out on Mia, I need her too
Top

Wow how lucky you got on Brian. I know all too tell the feeling of missing someone that was just in front of you.
Follow me on twitter https://twitter.com/celebmeets
Top

Glad u got Henson. I initially wanted to go, but since I got home late from the wedding I went to and I really stick to clasic Sesame, had nothing for him to sign just going for pic, I decided I'll wait.
Top
Post Reply
5 posts • Page 1 of 1