Small report for me on my 1st Baltimore Comic Con experience. There were 2 cons going on during this weekend; both of which had wants for me but ultimately I decided to just go to this one because of a bigger want that held a deeper meaning to me.

I drove to Baltimore, one of the few times I’ll actually drive to a convention, on Saturday morning and found cheap enough parking, which was within a 10 minute walking distance to the convention center. I made it in around 10:30, redeemed my tickets and went down to the show floor.

Only 1 person was at their table at this time, Tricia Helfer, which worked out since she was one of the few people I wanted to meet. She was nice; we had a quick convo, mostly about the show Chuck, which will be a common theme with this report. I got an autograph and took a photo, then was off to the next line. 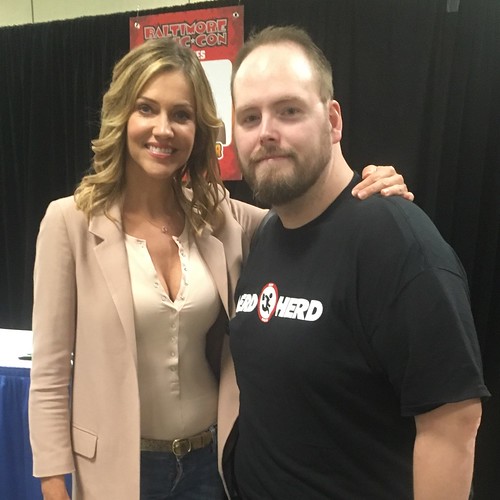 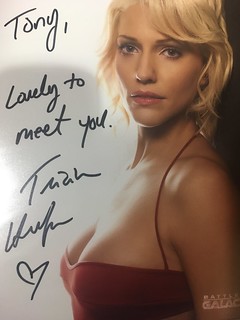 I went to Zachary Levi’s line next, the main reason I chose to go to this show. Chuck is one of my all time favorite shows, which should be evident when you see me in person now since one of my most visible tattoos is inspired from the show. Zachary came out shortly after to a loud ovation from the crowd. Waiting in line, I could see him geeking out at people’s costumes, items they were getting signed...he genuinely seemed like he was having a great time and that he was glad to be there. My turn came and it was basically just a bunch of nerding out between the both of us. He liked the mini-poster I brought to sign and the shirt I was wearing. I told him how much the show meant to me, as with others through my lifetime, as it would help me when I was having a hard time or was in a bad place. He stated that he’s honored to hear that from fans and that it’s one of the best feelings he gets as an actor. He signed my poster, I shook his hand, then he saw my tattoo and geeked out even more and thanked me for fully representing Chuck! 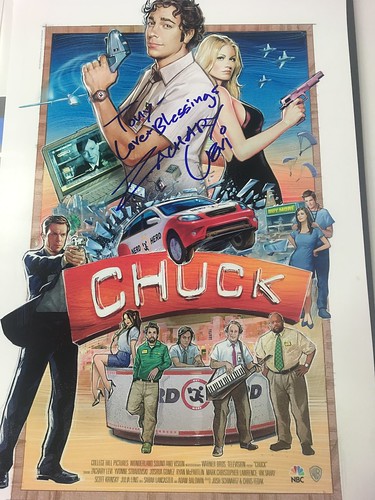 Next up was a repeat for me, but I wanted a “Chuck” themed autograph from Katrina Law. Katrina is still incredibly fun and goofy, as evident in the table op where she had props to use. I think I picked out a good one for the photo. 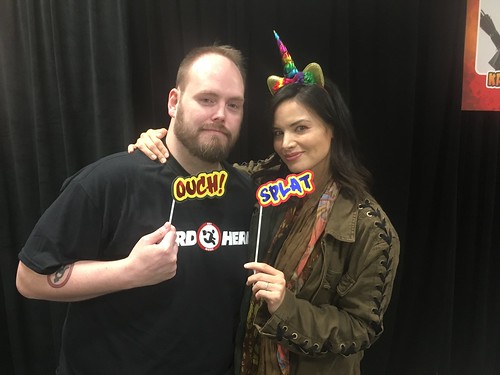 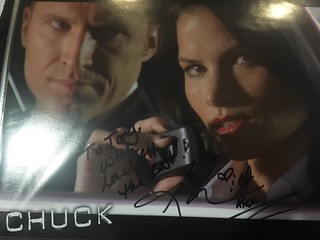 Lastly, was my pro photo op with Zachary Levi. Earlier in the day, I saw how horrible line management was for photos. They had an area taped off for line snaking, but no one from Epic was telling people how to line up, so lines were shooting out into the cafe area! Luckily this didn’t happen for this photo op, as a group of us started using the marked lines, which avoided a lot of clutter. Photo op ran smoothly and picture turned out great! 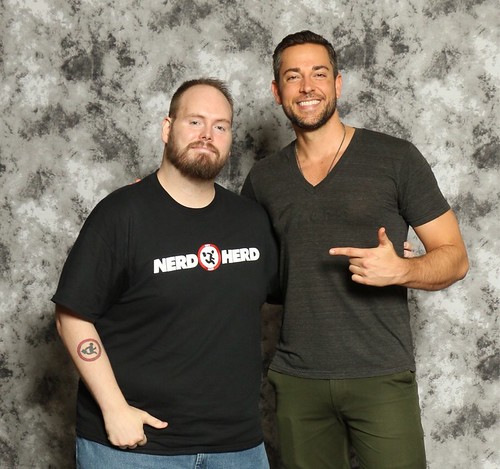 For my first year at this con, it was an incredibly easy and stress free day...it reminded me why I like to go to cons after such positive experiences. Meeting some main characters of my other favorite shows have been a let down in the past, Sarah Michelle Gellar and David Boreanaz come to mind, but glad it wasn’t like that at all for this show. It was also good catching up with MarkedOut members Greg, Joresky & Class. Hope you all enjoy this small report. I believe I’m done for the year so I wish everyone here the best!
Top

Awesome stuff and I'm glad Zachary Levi was in good spirits. I have no clue who he is but his name came up in some NYCC reports and he seemed a little stressed?
Feel free to visit my blog concerning wrestling conventions, signings, and meet & greets!
https://squaredcirclecons.com/
Top

ICW wrote: ↑
October 10th, 2018, 7:51 pm
Awesome stuff and I'm glad Zachary Levi was in good spirits. I have no clue who he is but his name came up in some NYCC reports and he seemed a little stressed?

He was on that show Chuck on NBC a few years back & is the star of the Shazam movie.
Top

Great stuff and I agree about the show not getting enough con love.
My collection:
https://www.flickr.com/photos/woodmo/albums
Top

ICW wrote: ↑
October 10th, 2018, 7:51 pm
Awesome stuff and I'm glad Zachary Levi was in good spirits. I have no clue who he is but his name came up in some NYCC reports and he seemed a little stressed?

Thanks, bud. I wouldn't say he was stressed at NYCC, I think it's just he did not want to do free photos while he was being paid to be there.

Thanks guys! I also agree...the show IMO is practically made to shine at conventions, yet I've never seen any of the main cast, aside from Zachary & Adam Baldwin attend them.