A look at the hobby in the 90s

man if i had even known about autograph collecting or thought about ,that you could get a photo with a wrestler back in the late 80's early 90's i would have so many great names.

remember going to the tucson con center to see guys like andre, studd, rick rude, junk yard dog, and more! plus in the early 90's i didnt even know there was a company called wcw , that came to our area in northern ca all the time.
Top

idk if this was posted, but here's a terrific WWF produced show from the Fan Fest at Wrestlemania X in New York in 1994, hosted by Todd and the Macho Man.


Bischoff referred to WWF as "Titanic Sports," and pointed out that they are now charging fans to get their pictures taken with the WWF champion (WWF started doing the Polaroid gimmick at house shows over the weekend charging fans $10 for a picture with them with Bret and the belt).

I wonder if this is a suited, in-ring picture or just a general pre/post-show meet & greet?
Feel free to visit my blog concerning wrestling conventions, signings, and meet & greets!
https://squaredcirclecons.com/
Top


I wonder if this is a suited, in-ring picture or just a general pre/post-show meet & greet?

OH! I replied to this on the freaking awesome network board when they did a WCW Observer news.

I went to the day before Survivor Series 1995 photo op with Razor Ramon. They also did ones with Ahmed, Savio and Alundra at other places. I am so glad I went to the Razor. I get WCW was doing free promo autograph signings and I went to a lot of them but I lost most of them, but the photo op I kept.

Even as an adult I am so happy I went to it. Razor is my hero even as an adult and I have the photo, which my friend Todd got signed for me, on my book shelf. A few years later I got to meet Scott Hall at a show where we held up the copy of my photo and that has been my facebook profile picture for 5 years. I have no plans on taking it down. I have a picture of Scott taking a picture on his camera of our photo and he gave his mother the copy of the photo since I already had the original. So that photo op Bischoff knocked made someone very happy for 25 years and counting.

And to the original question, the Razor was suited-not sure about the others. Somewhere on this site is my Razor photo, he is wearing a vest and blue slacks like he wore in the original 1992 promo videos. I am wearing the 1993 yellow Razor shirt which I wound up wearing out to the point it tore all up and I threw it away (a regret). I have never seen the other three photo ops. Ahmed and Savio were a dual photo op at one place and Alundra was at another.
Book WWE Hall of Famer Jimmy Valiant for your event!!
PM me!

Some new stuff I acquired to my personal collection.

First is a postcard WWF sent out to fans who wrote fan mail to Hulk Hogan. This card sells for $60-$100, but as someone who literally scours every corner of the internet to find obscure autographs, I was able to find this along with a signed magazine by the Hulkster from the same guy, and I talked him down to $60 for the lot with local pickup. 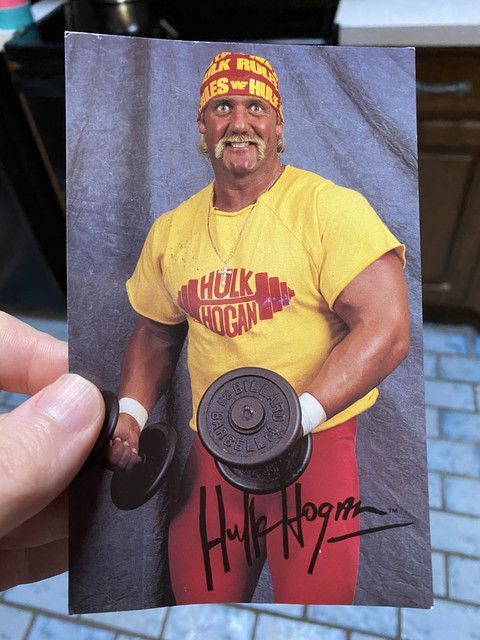 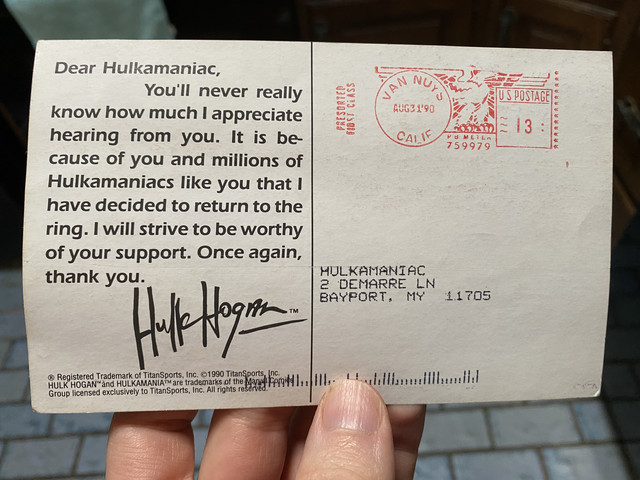 Another obscure find is this WWF program with match card, that was signed by Bossman, Hogan and Slaughter. I got a pretty good deal I think on this piece, and the seller even had photos he took of/with the guys signing. A very cool glimpse into old school combo hunting, and my first Bossman auto in my collection. 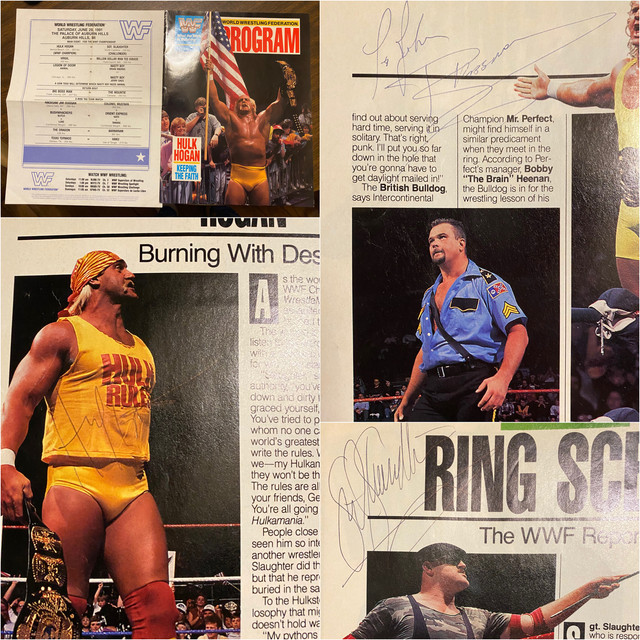 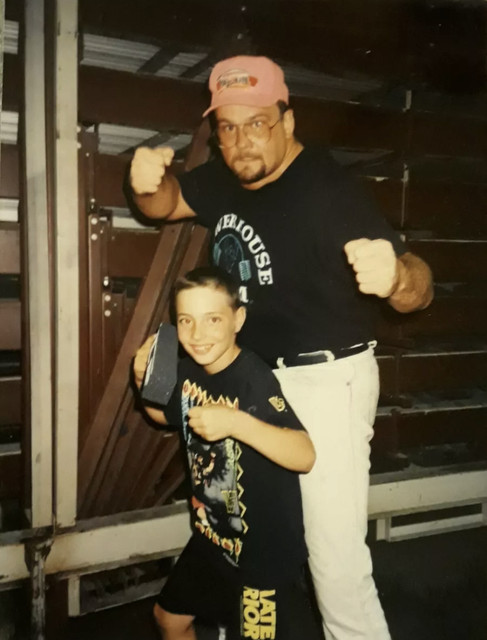 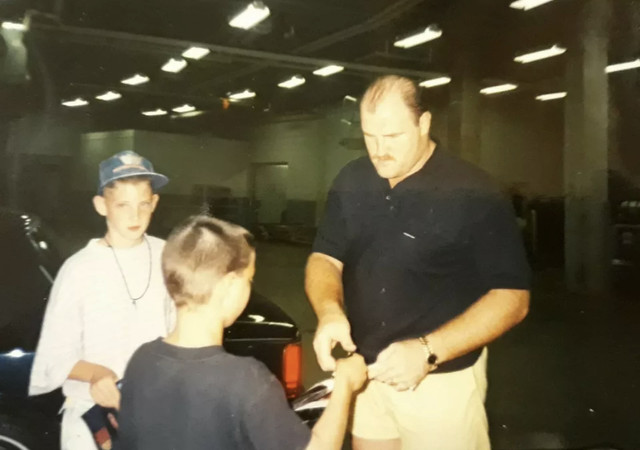 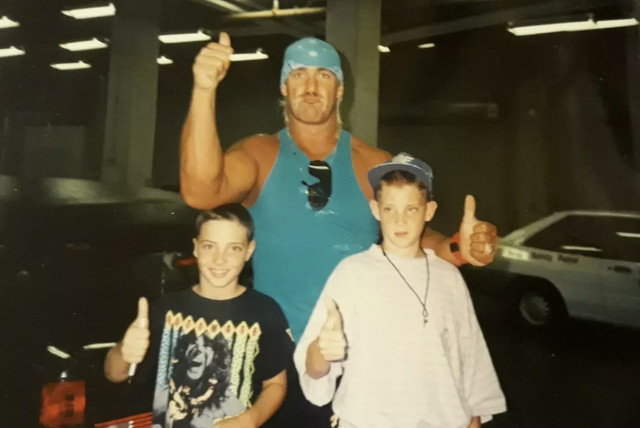 Great photos those little whippersnappers got!

BTW I would LOVE to find some old pics of any Hulk Hogan impersonators! My cousin had one at his birthday party 30+ years ago. I lost the "signed postcard" he gave out.
The Paunch Stevenson Show pop culture podcast : http://www.paunchstevenson.com
Top

BTW I would LOVE to find some old pics of any Hulk Hogan impersonators! My cousin had one at his birthday party 30+ years ago. I lost the "signed postcard" he gave out.

Was the impersonator good, was he popular with the kids or did he fall flat like the Ghostbusters 2 party?

Many years ago at a buffet autograph signing for WCW there were two wrestlers scheduled to sign. When my father called the restaurant they said it was "Alex Wright and a Hulk Hogan impersonator." I was pretty disappointed. I liked Alex but didn't like the idea of an impersonator. As a fan of lower card guys, I marked out big when I saw it was actually Dave Sullivan who had been doing the Hulk fan gimmick at the time.
Book WWE Hall of Famer Jimmy Valiant for your event!!
PM me!

BTW I would LOVE to find some old pics of any Hulk Hogan impersonators! My cousin had one at his birthday party 30+ years ago. I lost the "signed postcard" he gave out.

Was the impersonator good, was he popular with the kids or did he fall flat like the Ghostbusters 2 party?

My cousin was younger than me and enjoyed it. I was probably 10 or 11 and figured he was a fake. I recall he held the kids upside down and took a Polaroid and signed that.
The Paunch Stevenson Show pop culture podcast : http://www.paunchstevenson.com
Top
Post Reply
99 posts