Day two of the SummerSlam Meet and Greet was Saturday, August 10, and there were two sessions. For $$$ reasons, we didn't go to the 8 a.m. session and, boy, was I glad we made that decision after spending four hours on a concrete floor the prior night. We slept in on Saturday, and that's something we never do while on vacation, but it was nice to relax. Then, we got hyped to use our general-admission tickets!

At noon, we headed to the Metro Toronto Convention Center. The session was scheduled from 1 to 5 p.m., but I wanted to buy a shirt for me and my son, Miles, at the "Summer Slam Super Store." The store was not nearly as impressive as it was made out to be, but we were able to pick up shirts that we used for Saturday and Sunday and I think they made our photo-ops better.

The crowd was significantly larger than the previous night, which we expected. It took us 15 minutes to be herded into the venue, but that was OK because the wrestlers did not appear until 1:15 p.m. To our surprise, many good names were given the first two-hour shift. Christian, Cesaro, Matt Hardy, and Nakamura all signed at the same time, so we had to make a choice. We decided to go for Cesaro and waited in his line for more than an hour. It was really fun to meet him. Miles walked up and told Cesaro some of his moves that he really likes, including the Big Swing, and, according to Miles, "Cesaro said, 'Oh, heck, yeah,' but he didn't say heck." I thought that was a funny observation from a pre-teen. When it was my turn, I asked Cesaro to sign my daughter's book. I had accidentally double-booked her and she was watching the musical, "Come From Away," with her mother and sister. So I said, "Cesaro, would you please sign this for my daughter, Maeve?" He replied, "Maeve, what a beautiful name." Having chosen the name, I always love it when people say that. After we got our photo taken, Cesaro said, "I hope your daughter has a wonderful time at the show." That was nice of him. He seemed genuinely grateful for the positive feedback fans were showering him with that day. Here are our photos with Cesaro: 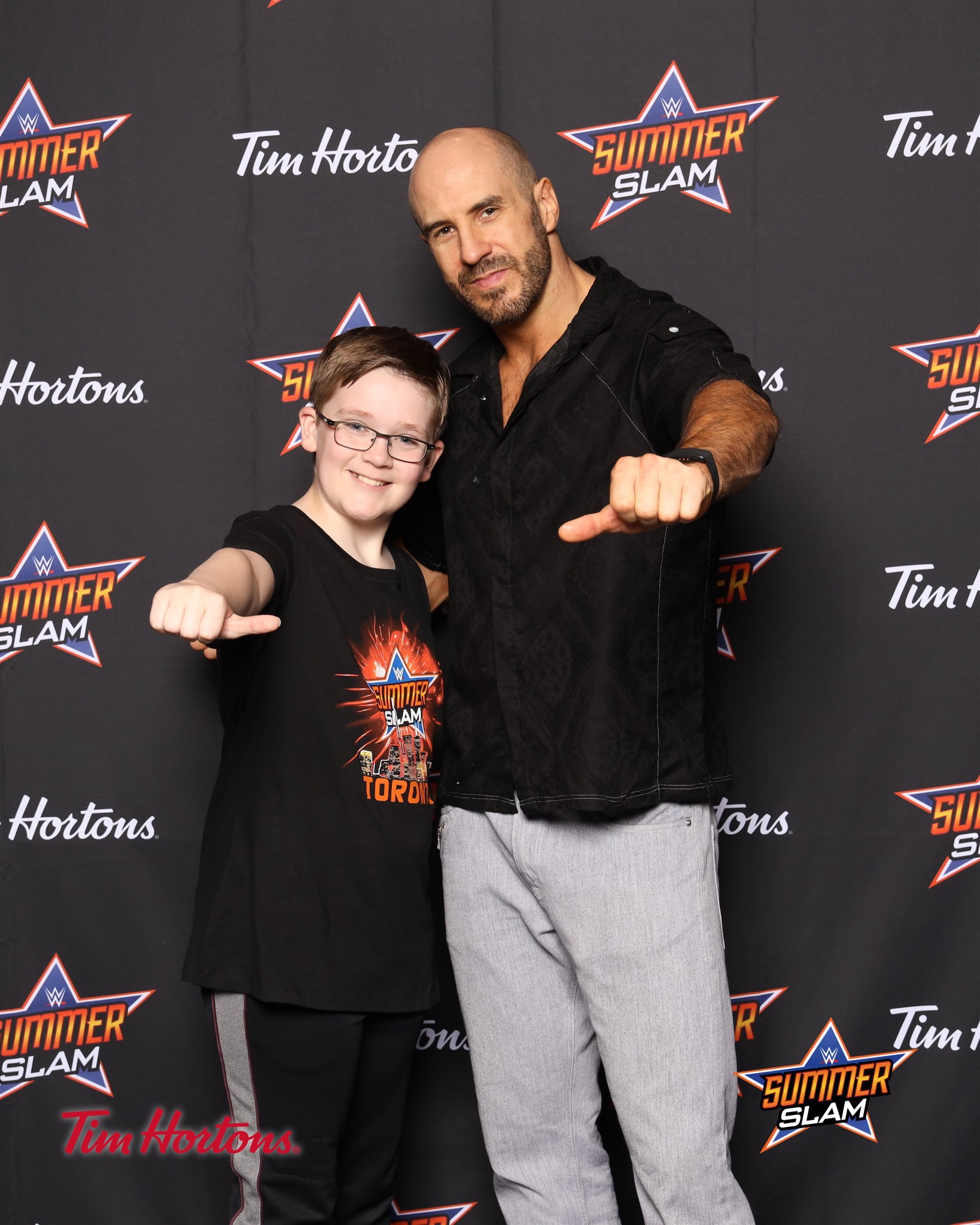 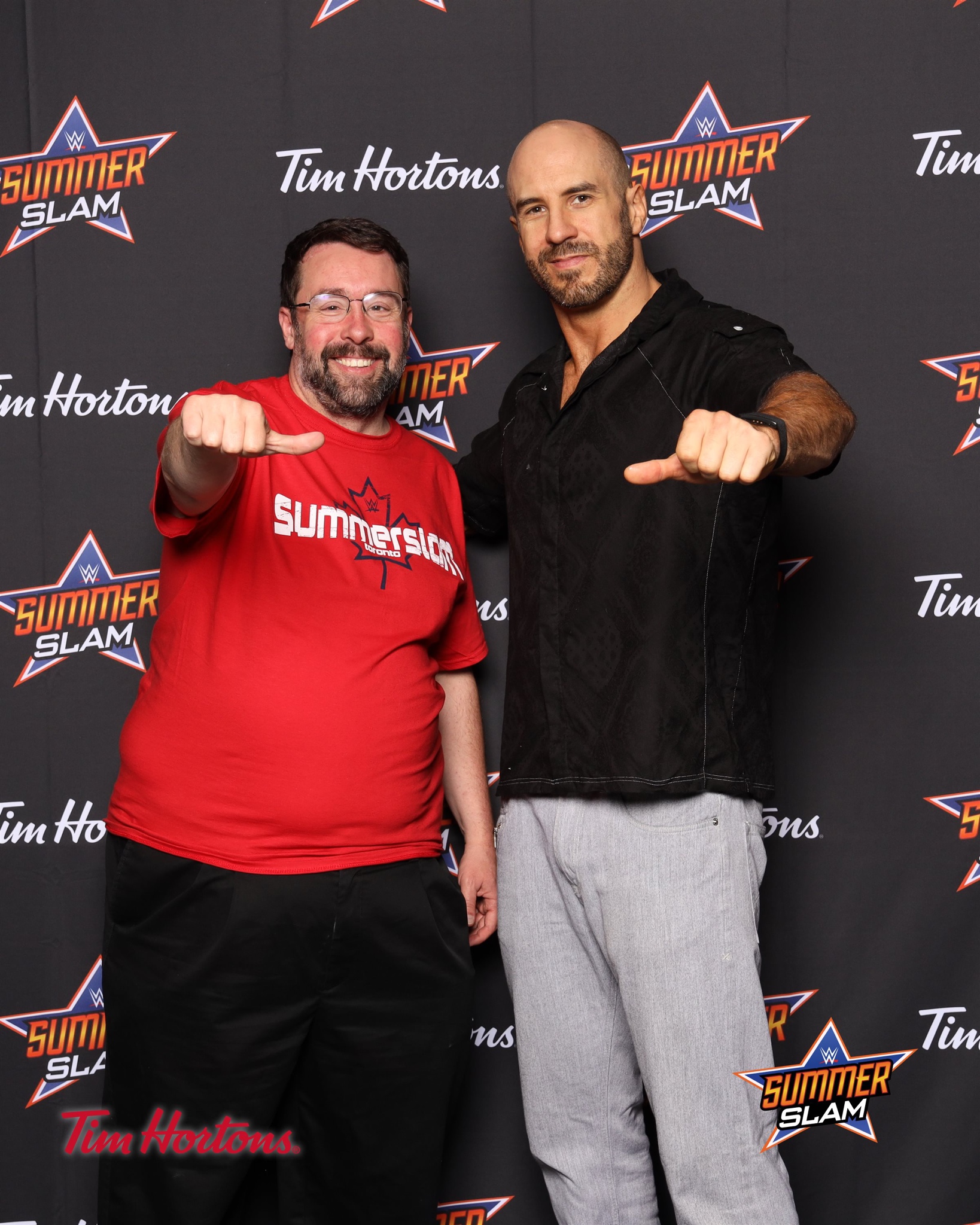 Knowing we would never be able to hop in the other stars' lines and make it to the front to see them, we went for the shortest, nearest line, which was for Cedric Alexander. We were quite fortunate, because he stayed a few minutes longer than the two-hour window, at which time the wrestlers are replaced with someone new. Miles and I were the last people to meet him. He was nice, and we got two good pictures. As Cedric was signing my baseball, a large (much bigger than I expected!) man walked up to us, but Cedric did not notice. I said, "Uh-oh, you better turn around," knowing it was Shelton Benjamin. They greeted each other like old friends who hadn't seen one another in awhile. We finished our adventure with Cedric and got right back in line, so we saw both men within 60 minutes, which was a good use of our time. Miles did not know Shelton because he missed his glory years, so I took some time in line to catch him up on the one-time rising star. Here are examples of our photos: 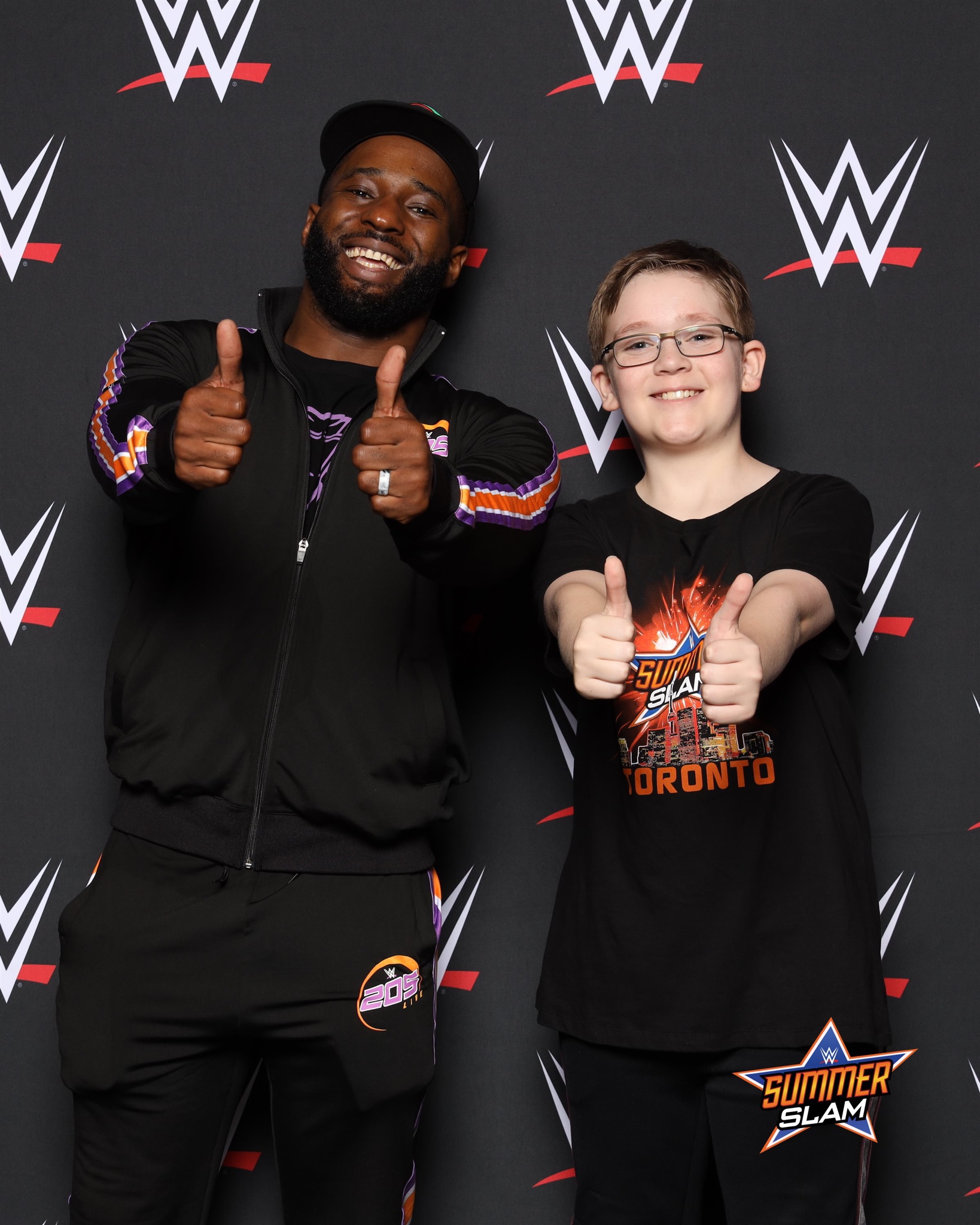 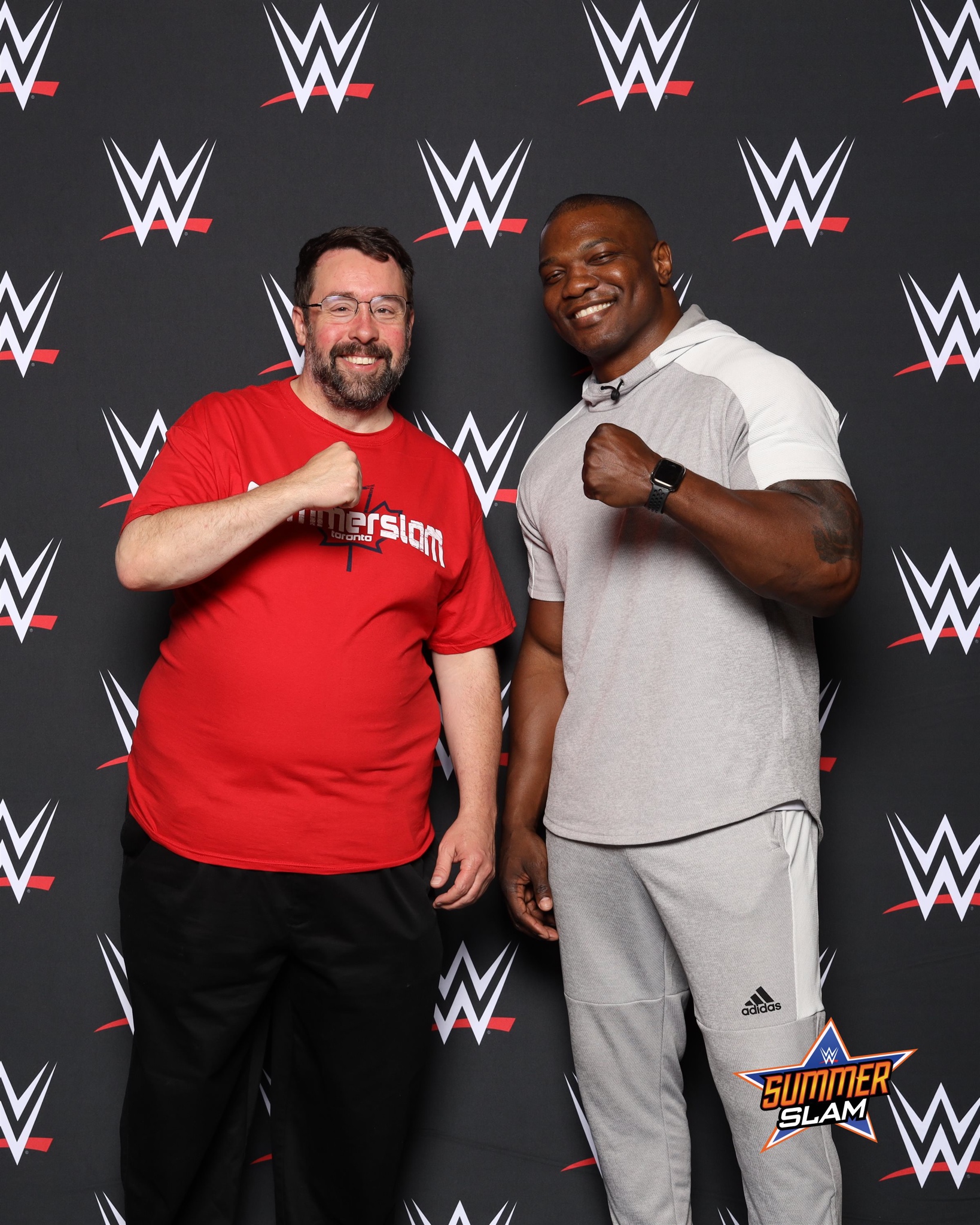 We were running out time for this session and realized we only had time time to meet one more person. We were fortunate to get in Baron Corbin's line minutes before they closed it. We waited in line for at least an hour. He had a big crowd, as big as Cesaro's earlier in the session. My son can't stand Baron, and it took some good convincing to get him in line. When it was my turn to meet Baron, I asked him to sign Maeve's book and said, "Baron, here's how I know you are good at your job. My son think you are the worst!" He laughed and got this broad smile on his face, and he seemed genuinely tickled by the compliment. He replied, "Thanks so much for telling me that. That's what it's all about right, drawing people in?" After our picture, he shook my hand and said, "Thanks for getting the little man involved in watching wrestling!" It was a very good experience. Here we are: 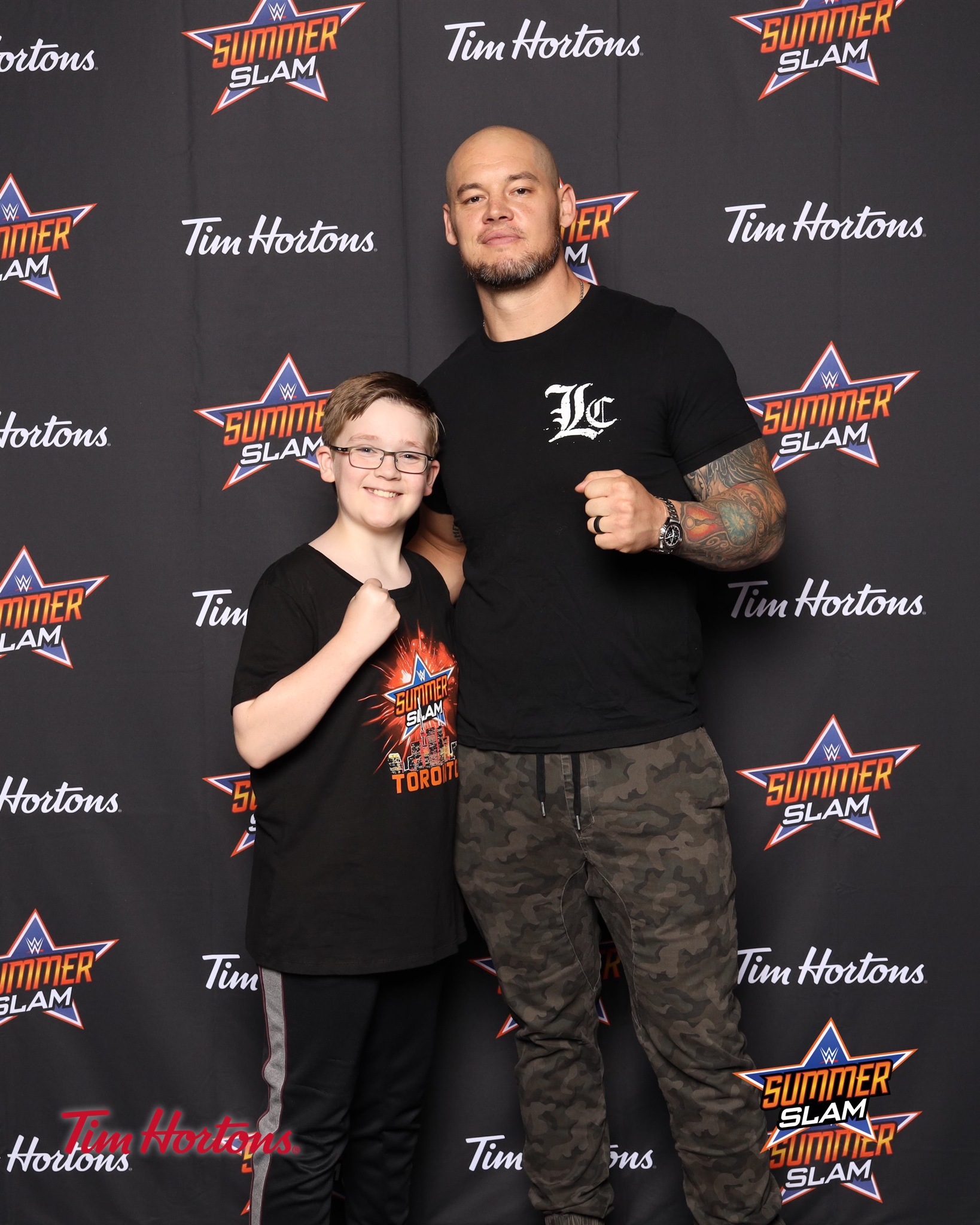 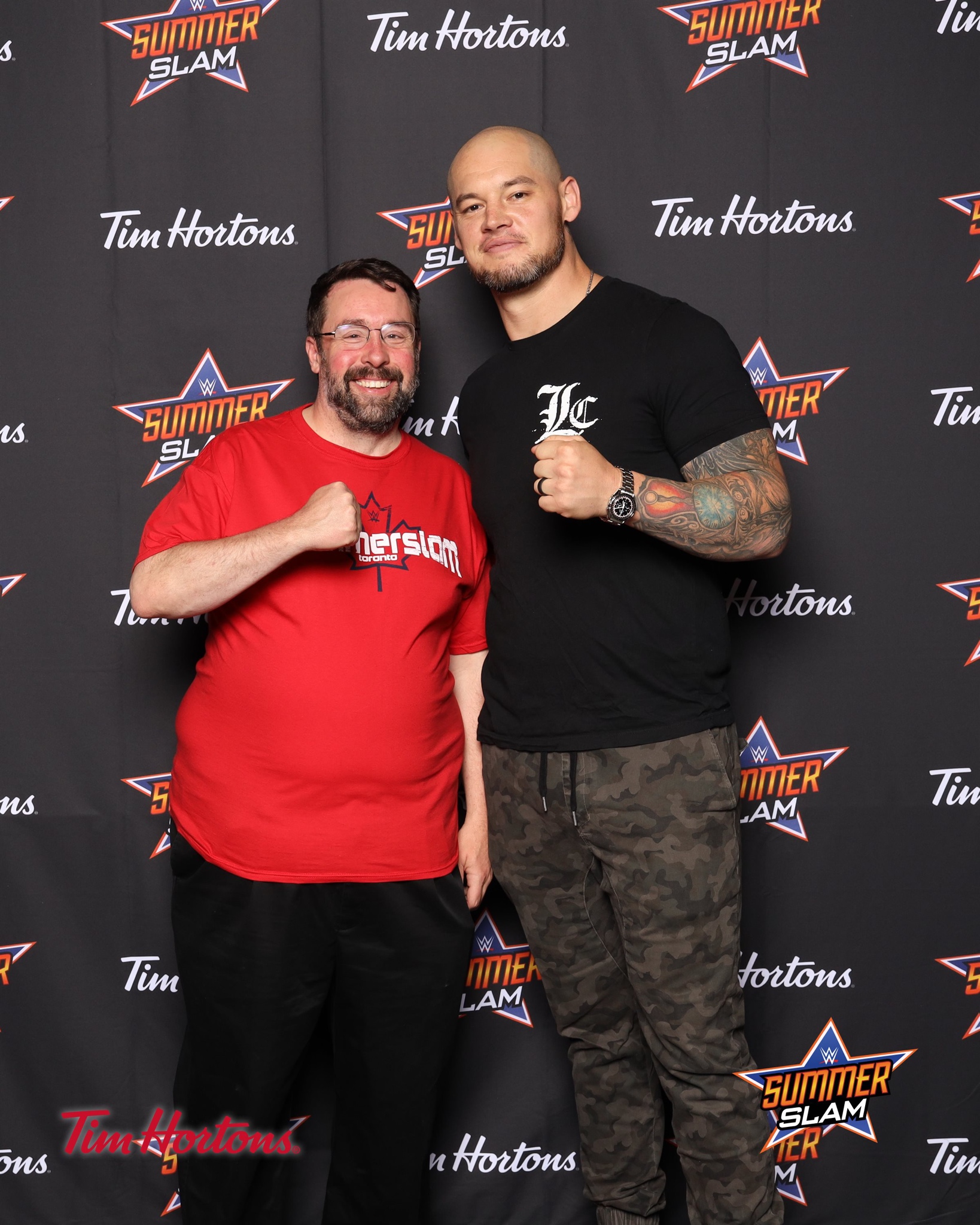 We left the show exhausted, but happy. I'll share a report of day three, the final session, soon. Thanks for reading!

P.S. - Here are some random autograph photos from the first two days. I took the picture of the WWE Encyclopedias to show how I used the railing posts to hold them for as much of the time as possible. They sure are heavy! 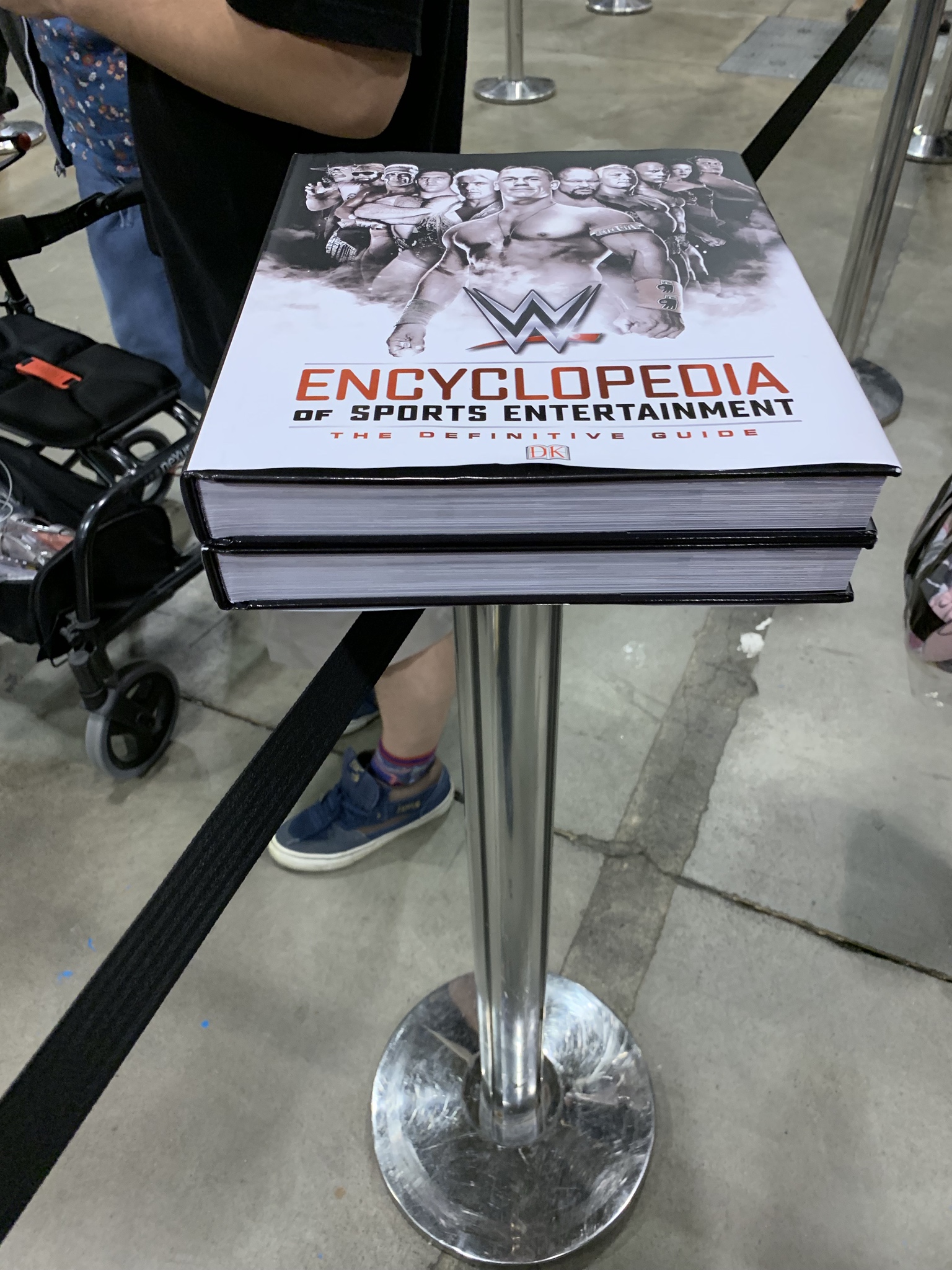 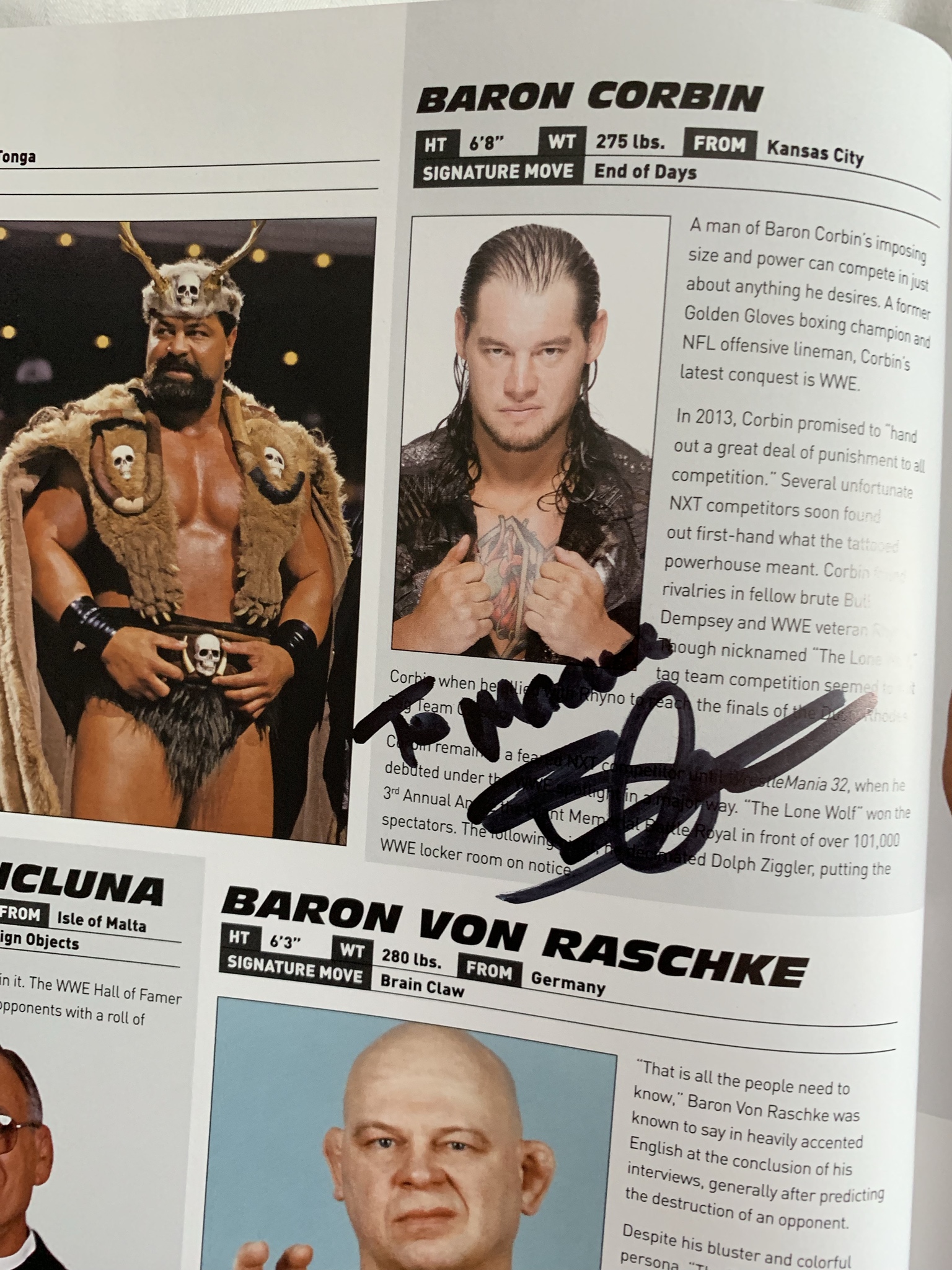 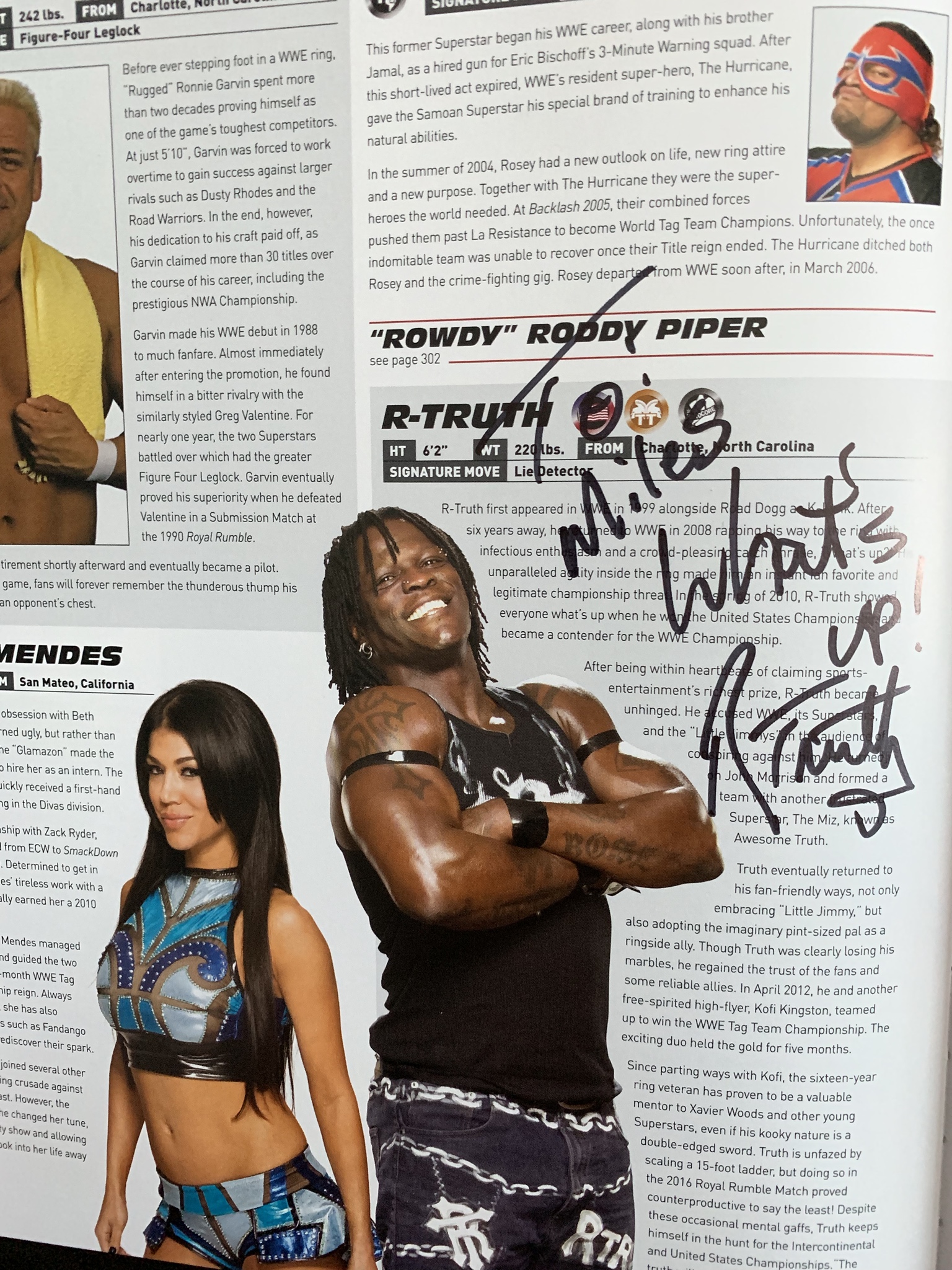 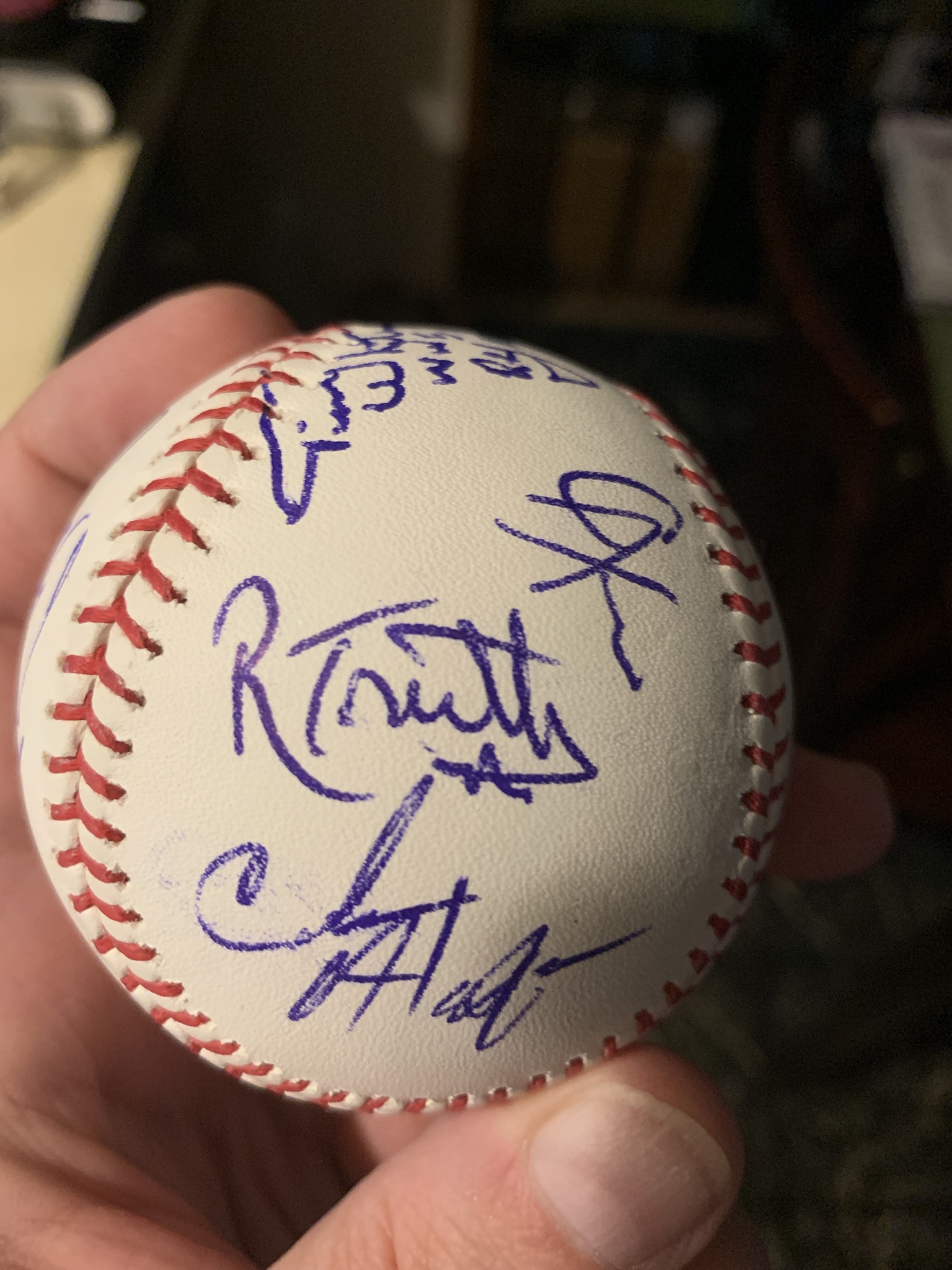 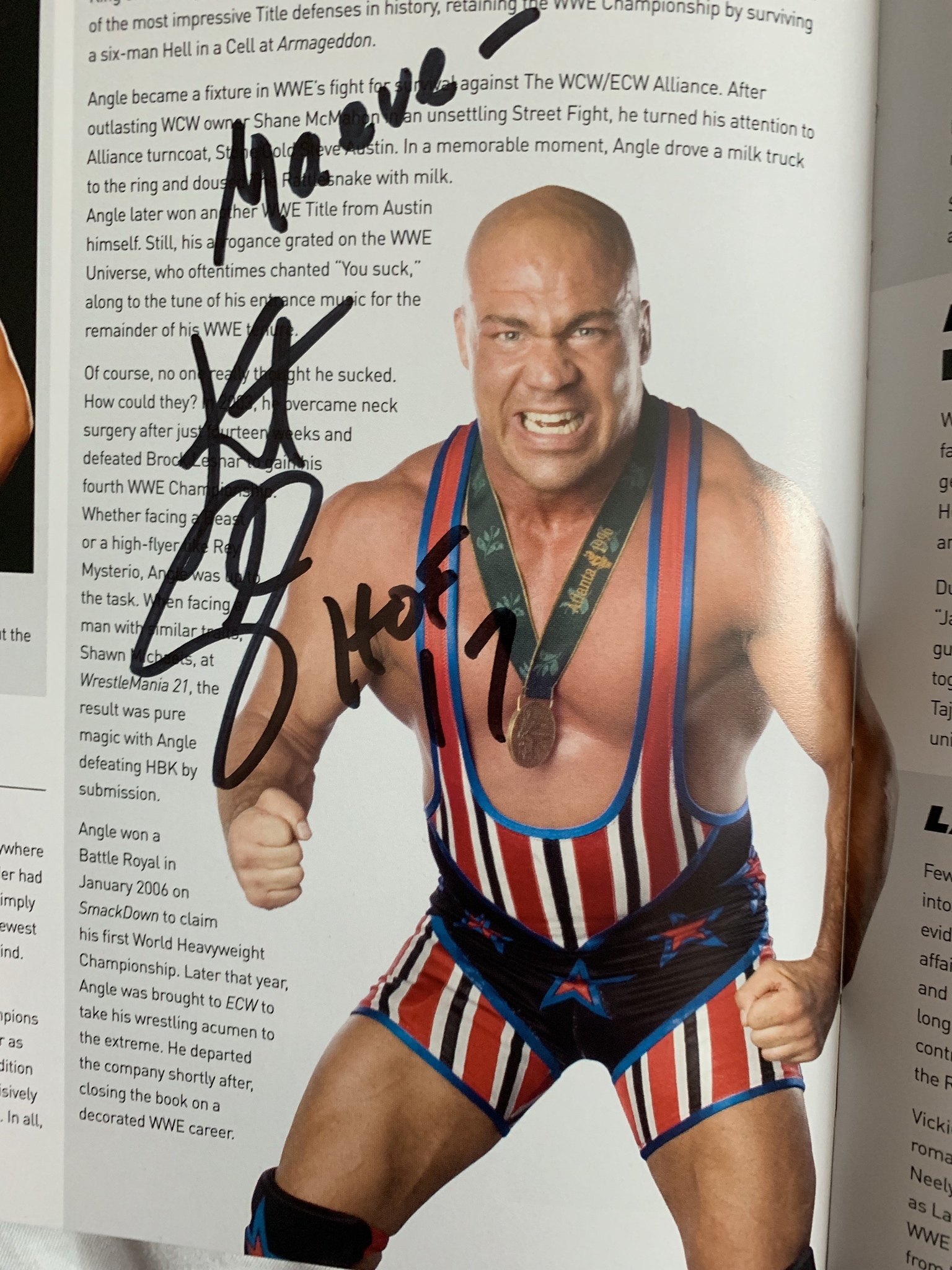