This is the place to post reports from signing or on the street meets
Forum rules
DO NOT post the location for on the street meets. To keep the spots from being too crowded, we don't allow locations to be posted. You may only post location details about pay meets and organized free signings.
Post Reply
1 post • Page 1 of 1

In 1967 Robert Pattinson and Bob Gimlin filmed footage of a supposed undiscovered bi pedal ape like creature. This footage would launch the image and concept of Big Foot otherwise known as Sasquatch into a staple of society as we know it today. Not only that, but it also launched the concept of cryptozoology with Big Foot as the most well known cryptid. Other cryptids that gained popularity include The Lochness Monster, The Yeti, The Chupacabra, The Jersey Devil, the South Carolina Lizardman, among others.

Robert died of cancer in the early 70s. But Bob is shockingly still alive and kicking albeit pushing 90. So when he was announced for his last con at Indianapolis Horrorhound, coupled with his age I figured it was now or never to meet this historical name. To boot, there were several other names I could get so I wasn't even going just for him.

As set my GPS to avoid all tolls and for the long and tedious drive to make my debut in the state of Indiana, I make a stop at a record store in Maryland where Bob Berberich of the band Grin actually works. Nothing huge but for being right there on the way, I get a photo op. 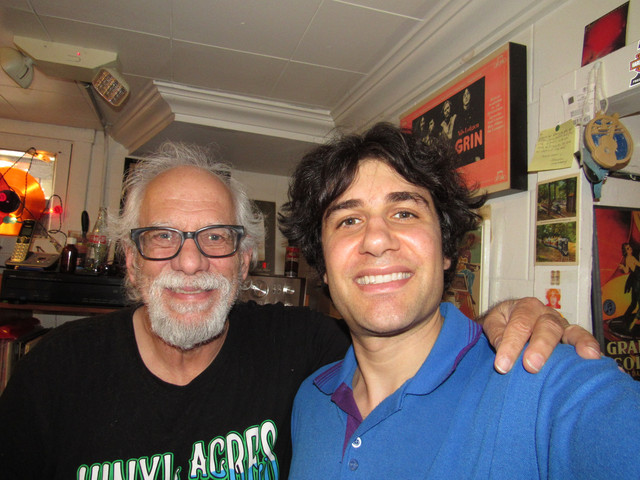 My next plan is to stop by the home of original bassist and co song writer of KC and the Sunshine Band, Richard Finch. Unfortunately there is major accident on the road (apparently a car fell off a bridge) and this sets me back 3 hours. So by the time I get to his town it was too late to knock on his door. I just continued to Indianapolis.

Arrive at the airport early morning to try for singer and actor Henry Rollins as he was leaving town (he was at Horrorhound Friday only). I had albums and was commissioned to get autographs. He did the photo op but when I asked for autographs he said he would only do one. He told me "you shouldn't be back here, you should leave people alone". 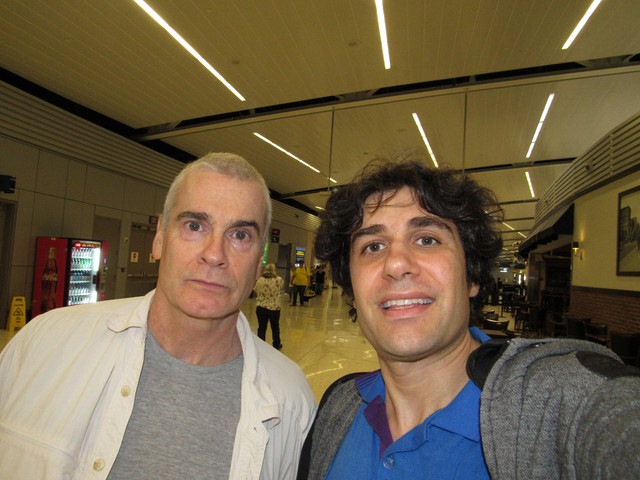 After this I go the the convention center, look around to assess the parking situation. Seems the closest and cheapest garage is $26 to park. So I drive a little further and manage to find free spots. I actually had a hard time trying to decipher the signs so I asked 3 different locals to make sure the spot was legal. Turns out it is. With that, I took a nap.

Woke up and got into the con. First stop I get Giorgio A Tsoukalos who is best known for the show Ancient Aliens. For some reason he was in the main con area and not the "fact or fiction" area. 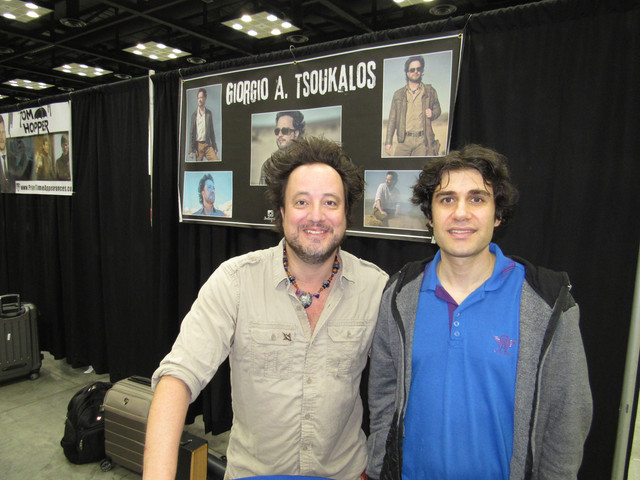 Next up I check out the "fact or fiction" room where I finally meet Bob Gimlin. He was the best deal of the day. For $30 he signed by 11x14 of the iconic frame in the footage, gave me a pre signed photo from his table, and took photo ops with me. Can't beat that in this day and age. Told Bob how I had to come cause it was his last con he said he was getting old. Told him that I hope to look as good as him when I'm his age. He said I would look "better". 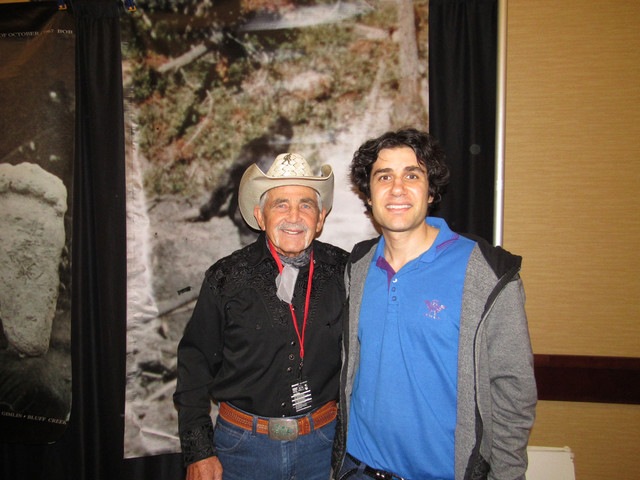 Still in the same room I manage to get a free photo op with Travis Walton. He is one of the most well known alleged Alien abductees. He wrote a book about his experience and it was made into the movie "Fire in the Sky". 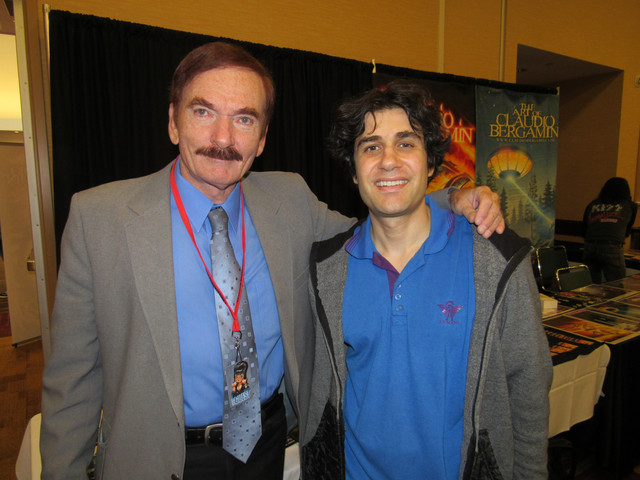 Back to the main con area to start with movie and TV names. Luckily I didn't need any of the big names as I pretty much got all of them for free on the street. So no one I needed had a long line. That was a nice feeling.

First up, Elsie Neal from Scream 2 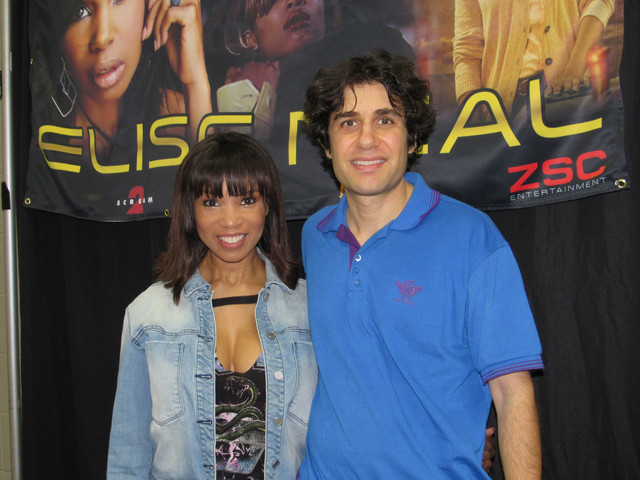 Then I go for Elizabeth Berkley from Saved by the Bell. Seems she makes faces in all her photos so for those going to RICC to meet her keep that in mind. I am now missing just one name from that show. 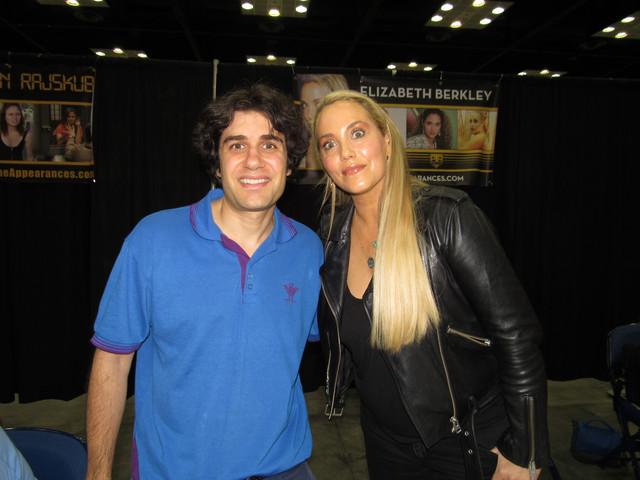 Next up, from Pitch Black and other movies Radha Mitchell 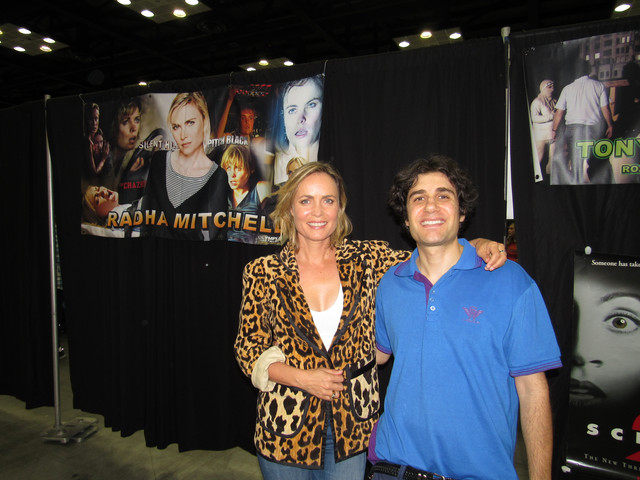 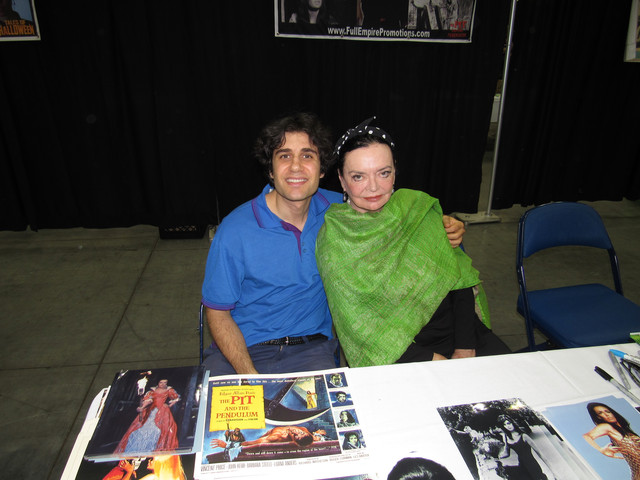 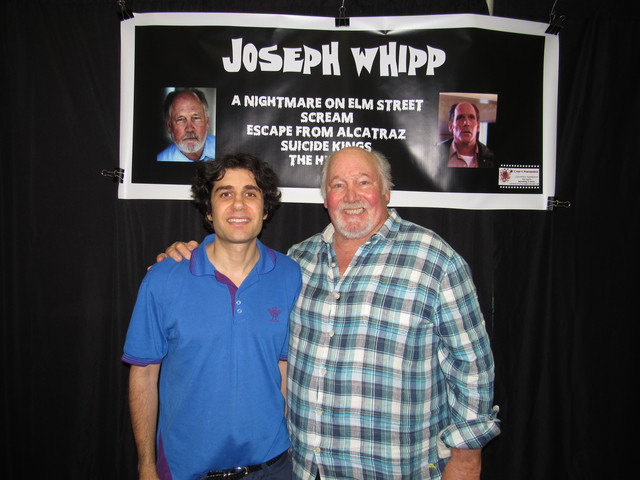 Next up, world's tallest model, Amazon Eve. Even did a selfie from above photo op. 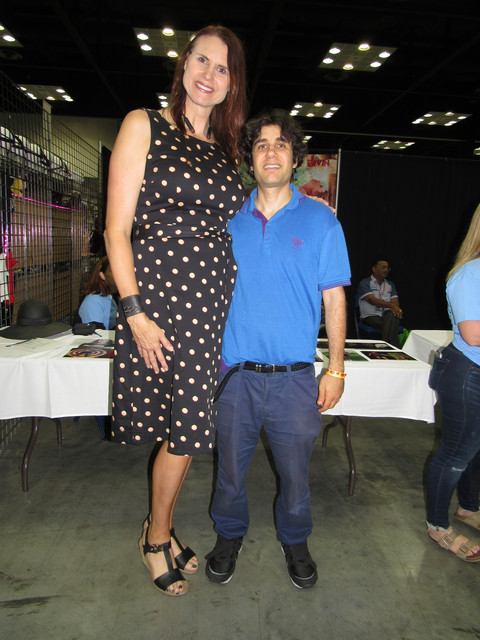 Next up two names from Hocus Pocus, Larry Bagby and Tobias Jelinek 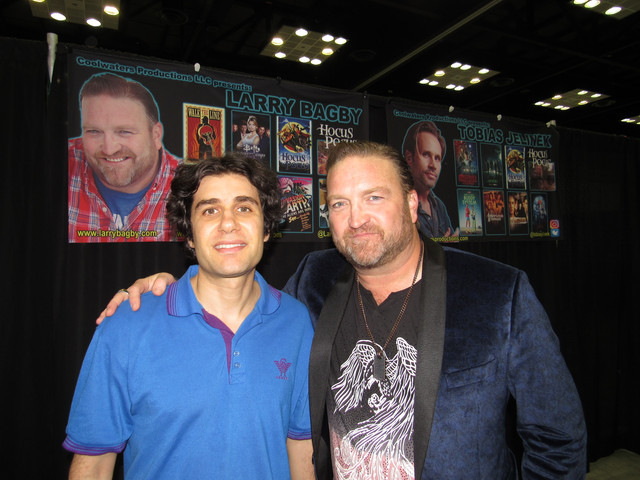 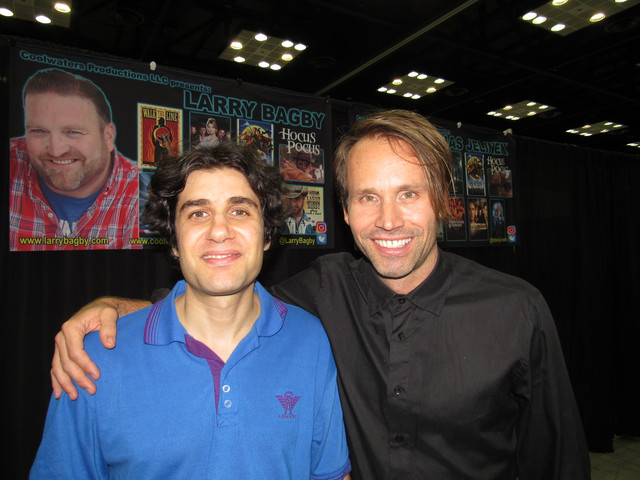 Picked up a free photo op with screen writer John Russo even though I got him at Chiller. 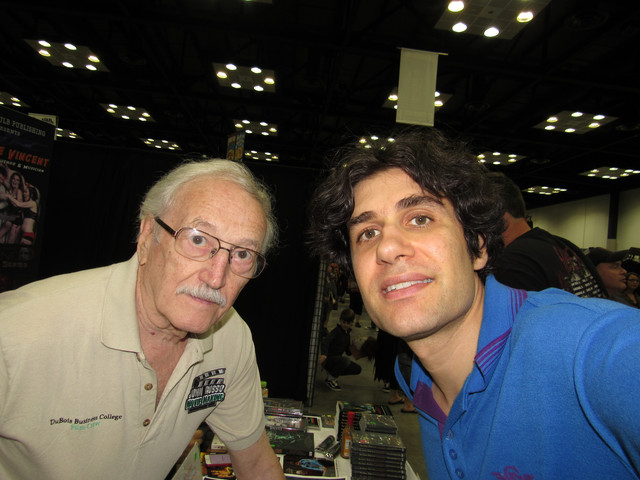 Got actress Kate Siegel whom I skipped at Monstermnia. 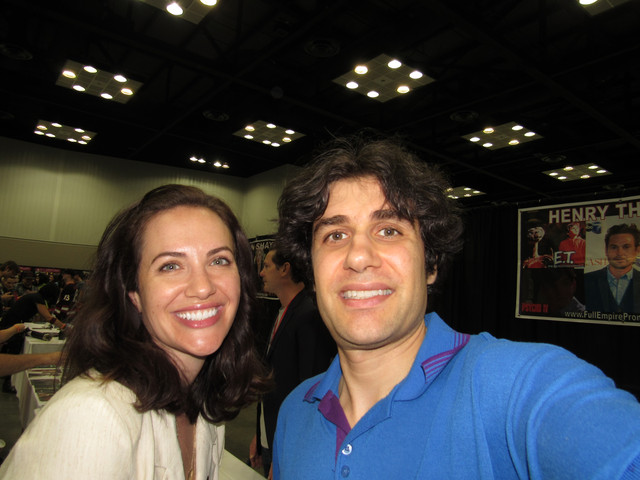 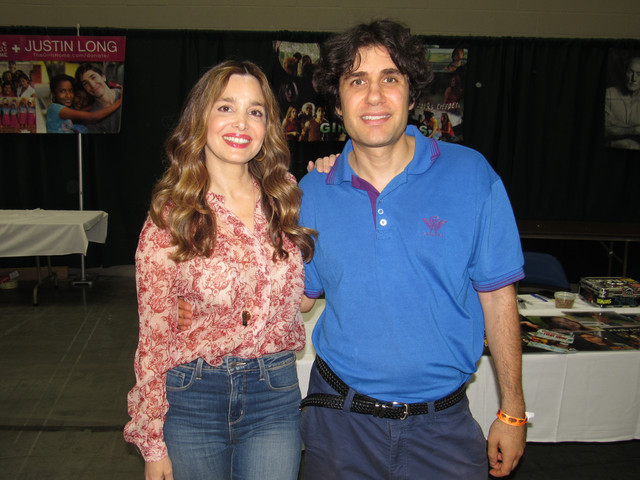 The smallest woman in the world, Indian actress Jyoti Amge 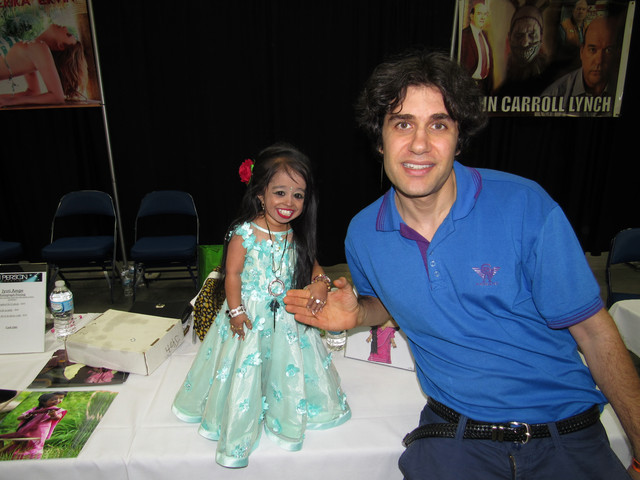 Then up to Mark Holton of Teen Wolf and Leprechaun fame 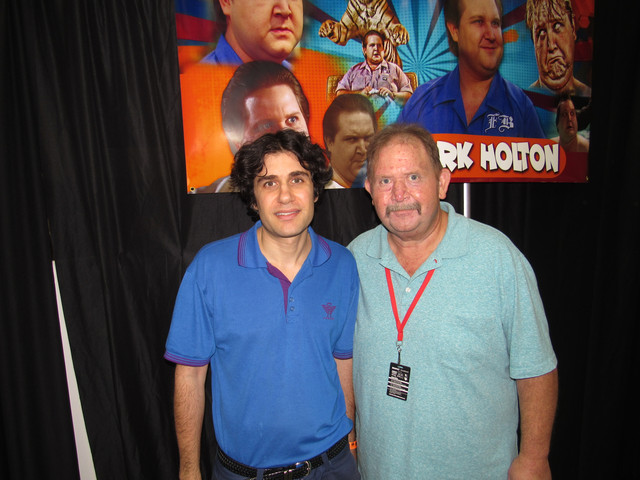 Finally, I get Mary Lynn Rajskub from Dude, Where's My Car and other movies 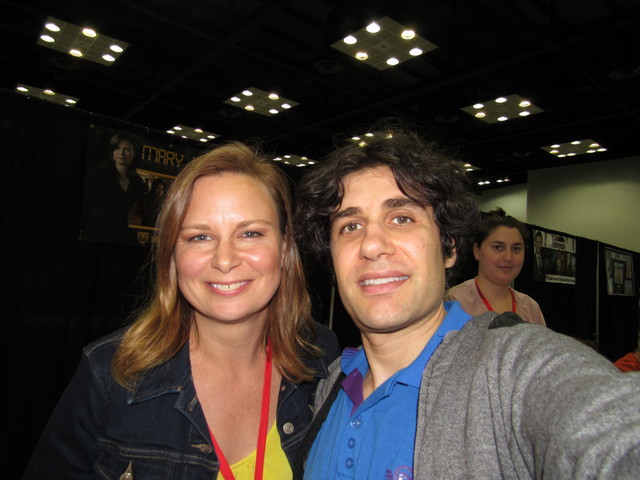 Other happenings during my time at this con, I relaxed and attended the Bob Gimlin panel. At most other cons I'm usually so stressed and pressed with time I don't get to do things like that. Also ran into former board member

and said hello to him as we shook hands. Attended a little bit of the Travis Walton panel where he described his abduction experience and compared his supposed experience with how it was depicted in the movie. Then it was time to drive out as I still wanted to make Richard Finch. As I left the con I saw Rose McGowan smoking and chatting. For shits and giggles I asked for a photo op she goes "I'm doing them inside".

Set the GPS to avoid tolls and hours later got to Richard Finch's place. The neighborhood was very dingy. Basically several town houses in one stretch of a building. And his apartment didn't look inhabited. It was all dark. After a few knocks I headed out.
Follow me on twitter https://twitter.com/celebmeets
Top
Post Reply
1 post • Page 1 of 1